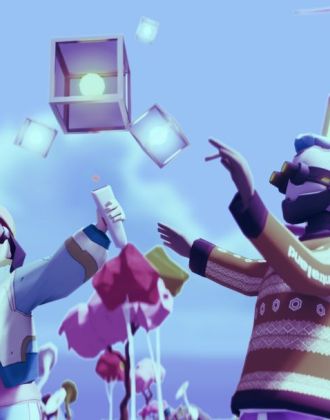 Driven by the overall upward trend market of NFTs globally, NFT has broke into mainstream in China with a growing number of institutions, venture capitalist and celebrities allocating a percentage of their portfolios to digital assets.

Driven by the overall upward trend market of NFTs globally, NFT has broke into mainstream in China with a growing number of institutions, venture capitalists and celebrities allocating a percentage of their portfolios to digital assets.

NFTs, an abbreviation of non-fungible tokens, have been around for a while, but the digital-art boom is just getting started in China. The first shift in bringing NFTs into the public eyes has to do with institutional supports. That's where Chinese tech giants like Alibaba and Tencent come in. However, almost all participants of NFT projects were private-held enterprises and individual investors until Xinhua’s foray into NFTs in December ahead of Christmas Eve.

Xinhua News Agency, the biggest media organization in China, made headlines for releasing 110,000 limited copies of selected news photo in NFTs. The NFTs itself are enough to excite and surprise NFT communities in China, but what’s particularly important is that the participation of the mouthpiece of Chinese Community Party could signals reversal of Chinese regulators’ cautious attitude toward the NFTs. The move also brings headwinds to the development of NFT projects in China, motivating potential startups which have been hesitating to jump on NFT bandwagon due to regulatory concerns.

Previously, the People’s Daily, another mouthpiece of the Chinese Communist party, warned investors about risks of fraud associated with the NFT market frenzy and questioned whether NFTs is another tulip mania hyped by capitals.

However, the Chinese government has not explicitly banned NFTs, leaving some areas for dozens of listed companies to issue announcement that lay out their business plans and projects to the emerging tech trend.

Increased media coverage and institutional participation in the NFT space have resulted in celebrities exploring the potential of the digital assets, as well.

Similar to other popular NFT series such as Cryptopunks and Bored Apes Yacht Club, each digital bear has its own unique characteristics that is created by the algorithm and is different in colours, with different clothing and accessories designed by Jay Chou’s PHANTACi.

On NFT marketplace Opensea, the floor price of Phanta Bears rose to 0.4 eth from its starting price of 0.26 eth, a large increase of USD1,000. Some buyers of Phanta Bear are reportedly resold the collection for as high as 20 eth (approximately USD77,000 dollars) on Opensea.

JJ Lin, who is also well known for his songs and music creation in mainland China, had spent nearly USD1 million on three pieces of virtual land in Decentraland, which is a virtual world based on the Ethereum blockchain.

“From apes to crypto punks to metaverse land, who’s with me? JJ Lin twitted, showing his obsession and passion for NFTs.

NFTs present the opportunity for celebrities to sell a piece of IP that can appreciate in value over time and become a cherished item for fans. More and more well-known artists and new stars have become acutely aware of utility behind NFTs since they can interact with fans in in digital world by selling unique, NFT versions of their songs, albums, and artwork. Eventually, those celebrity could cash in some high profits from their NFT sales.

The record-smashing NFT sale comes after months of increasingly valuable auctions. In October 2020, Beeple sold his first series of NFTs, with a pair going for USD66,666.66 each. One of the NFTs that originally sold for USD66,666.66 was resold for USD6.6 million in February, 2021.

For Chinese brands, experimenting with NFTs remains a PR-driven tactic, but also a market campaign that offer some type of consumer engagement and help reading the minds of the next generation of consumers- what they want to see from brands. Unlike older generation, millennials are those who are more willing to spend more money on fashionable collections and virtual experiences.

Tech companies Alibaba and Tencent, electric carmaker IM Motors and bubble tea chain Naixue’s tea are among the many to foray into the red-hot NFT market in recent weeks.

For example, Naixue’s tea launched its first NFT collection in December, 2021. The NFT launch was also in celebration of the brand’s 6th birthday, which resulted in the creation of 300 limited copies of unique NFT art pieces featuring its digital icon and brand ambassador “Nayuki”.

Naixue added that each NFT also grants the right for the initial holders to receive one complimentary limited VIP black card of Naixue’s tea and other first-release welfare products.