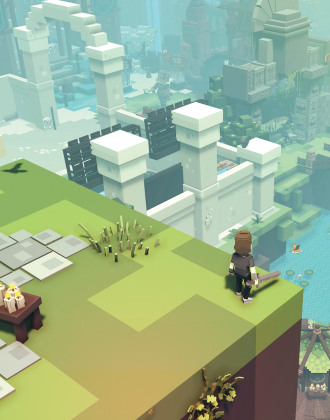 Adrian Cheng Chi-Kong, CEO of New World Development, will acquire one of the largest plots of virtual land on decentralized gaming virtual world the Sandbox

According to a statement from Cheng’s office, he has invested in the sandbox and his virtual real estate will be one of the largest plots on the sandbox that will also become part of a virtual world called “Mega City”. The Mega city will include an “innovation hub” that showcase 10 startups in the Greater Bay Area, a mega economic zone that links Hong Kong and Macau with nine cities in southern China’s Guangdong province.

Like many young people, Cheng, the third-generation scion of New World Development, is bullish on metaverse, a new digital trend that tie many technologies like social media, virtual and augmented reality, social media, non-fungible token, cryptocurrencies together.

The Sandbox allow players to build a digital identity in virtual world, buy and sell in-game items like lands and avatars using SAND token, the Sandbox’s native token linked to the Ethereum blockchain with the standard of ERC-20.

Boosted by positive news like Facebook renamed to Meta and Softbank’s large investment into Animoca Brands, the price of SAND token went parabolic from USD0.8095 on Oct,26 to its peak of USD8.4 on Nov,25, according to cryptocurrency price tracker Coingecko, it is currently worth around USD5.29, down around 36% from all-time high amid cryptocurrency market correction.

Founded in 2014 by Siu Yat, Animoca Brands owns and developed a broad portfolio of blockchain-based game like the Sandbox, as well as Formula 1, Revv racing, Crazy Kings, Crazy Defense Heros.

The seven-year-old startup could be one of the biggest winners in NFT market this year, it’s early investment in NFT-related companies like Dapper Labs, the firm behind pioneering blockchain game CryptoKitties, the world’s biggest NFT marketplace OpenSea, as well as Sky Mavis, the developer of “play-to-earn” blockchain game Axie Infinity, saw massive return as each firm grew dramatically in bull market this year.

Recently, it has partnered with Cube Entertainment, a South Korea-listed talent agency, to launch NFTs for K-pop groups.

Now, Animoca has more than doubled its own valuation with a new funding round just months after the last one.

In October, the Hong Kong-based firm announced a new USD65 million funding round that values it at around USD2.2 billion, which is more than doubled from the USD1 billion valuation earlier this year.

The firm counted some big names as its investors. Last month, it has secured USD93 million in a funding round for the Sandbox from investors led by Japanese Softbank Group.

Earlier this year, Animoca pulled in USD138.88 million in two funding tranches from investors including Coinbase Ventures, the venture unit of cryptocurrency exchange Coinbase and Samsung.