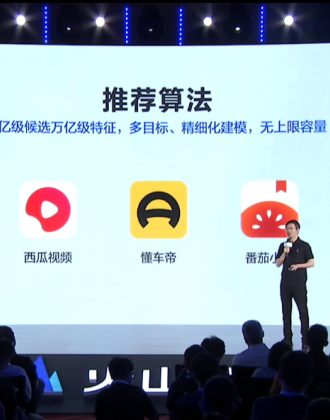 For those who have been envious of ByteDance’s immense success across its various consumer products, and more specifically, the recommendation algorithms powering those products, there is finally good news.

With a new brand called Volcano Engine, ByteDance is now making the technologies that drove the success of TikTok, Douyin, Toutiao, etc., available as a commercialized service to enterprise clients for the first time.

Volcano Engine is a suite of services that purportedly assembles the “tools, technologies, and methodology” of ByteDance’s growth legend, covering its recommendation algorithms, audio-visual technologies, data insight services, cloud computing solutions, and more. It is quite literally a copy of the ByteDance's growth hacking “secret sauce”.

According to Yang Zhenyuan, a vice president who oversaw the Beijing-based internet giant's past efforts to develop core technologies like algorithms and data infrastructure, there are already “thousands” of employees scattered across teams building such technologies.

The relationship between ByteDance and Volcano Engine is akin to that of Amazon and AWS. In fact, during the launch event, Yang mentioned AWS, which originated from a set of tools Amazon engineers made for themselves and colleagues, as a key example, commenting that it is the destiny of big tech companies to make their internal technologies available to the public (in the form of new enterprise services).

Volcano Engine has been in a semi-stealthy operation for more than a year now, serving limited customers both external and internal. This is because it is run by a separate subsidiary company under the same name, and sees other businesses within the ByteDance ecosystem, such as companies acquired by ByteDance but operating individually, as customers. The way Volcano Engine is set up means that some of the entire ecosystem’s expenditures on the technologies can now be recognized as the Volcano Engine’s revenue, allowing it to grow in a more organic manner and further realize its strategic significance.

Before it was decided that ByteDance’s core technologies would solidify as a standalone business, Yang’s team had been receiving third-party inquiries on making them available for years. The team was humbled by such inquiries, and decided to run a pilot program with Chinese smartphone maker Vivo.

Seeing the latter’s app store related per-user ad revenue increased by 17% after incorporating a modified version of ByteDance’s recommendation algorithm, the internet giant saw the huge potential of commercializing other technologies that is powering its own growth.

The key value proposition is that digitizing businesses in hundreds, if not thousands of industries, involves very long and hard work spanning research, navigation, trials, and actual development, but now most of that work has already been done by ByteDance, with many of its own successful products serving as examples. Therefore if businesses aspire to be as successful as ByteDance, and want to skip all that hard work, Volcano Engine would allow them to be closer than ever to their goals.

To dive further into Volcano Engine: the suit offers a very comprehensive suite of tried-and-true capabilities, including personalized recommendation, fast A/B testing, beauty filters, machine translation, automatic content generation, video streaming optimizations, data-driven insights, and conventional cloud computing offerings like compute, storage, and virtualizations, to name a few. ByteDance claimed that their current clients particularly enjoy the fast A/B testing capability, which is one of the most important data-driven tools for decision making on all levels.

ByteDance hopes that clients would value the fact that these services were already proven to work on its own apps with hundreds of millions of users.

Besides tapping into these commercialized services, customers of Volcano Engine can also talk in-depth with the teams that built them to gain more first-hand knowledge. In this way, Volcano Engine is not only “Bytedance’s AWS”, but can also be seen as a growth consulting business. It has three components, according to Tan Dai, the company's general manager: the underlying technologies, the previously internal-only tools built upon the technologies, and the intangible growth methods and experiences. Tan claimed that all three would be provided to Volcano Engine’s clients.

ByteDance has long been looking for opportunities to diversify its income stream, which traditionally relied on ad revenue from its matrix of consumer-facing apps like Douyin and Toutiao. It entered the enterprise market a few years ago with Feishu, a team collaboration software known as Lark overseas. That software is one of the earliest efforts by ByteDance to commercialize its internal tools.

As for whether ByteDance is still keeping some of its top secret capabilities away from the public, the answer seems to be negative. Tan says that ByteDance executives are dedicated to “make everything they’ve built publicly available”.

“ByteDance doesn’t really have a ‘secret’ for growth,” said Yang, rhetorically, “We excelled at the recommendation algorithms, the audio-visual technologies, as well as the data-driven technology stacks… Now we are giving away these ‘secrets’ to our enterprise customers.”

Volcano Engine is also launching a marketing campaign to give away some of the company’s offerings to a first batch of 1,000 small and medium sized enterprises, while continuing to work with more industry-leading enterprises to develop solutions for their respective problems.