JD restarts oversea expansion after a series of IPOs 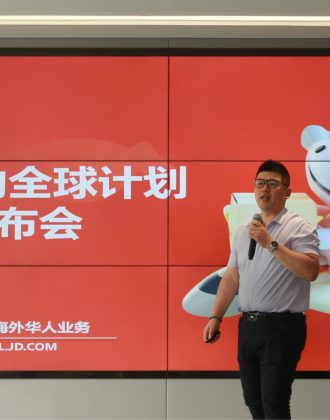 The e-commerce platform had wanted to be seen as a legitimate global company for a long time, but meaningful progress only began to be made recently.

JD.com, one of China's biggest e-commerce and logistics giants, will step up its overseas expansion after taking its logistic unit public on Hong Kong Stock Exchange.

JD logistics said on May 21 that it will issue 609.2 million shares globally, among which 18.27 million shares would be issued in Hong Kong, at 40.36 Hong Kong dollars each. The Hong Kong listing is scheduled for May 28. Proceeds are planned to be used to expand JD's warehouses and logistics networks, as well as upgrades to its technologies.

JD takes a heavy-asset strategy as a way to differentiate itself from Alibaba, which relies on a network of third-party logistics to deliver orders. The company has long operated a first-party logistics network in China, offering quicker delivery than that of the other e-commerce platforms, and significantly began to invest even more towards a full-fledged logistics and transportation network since 2017.

According to the JD Logistics' IPO prospectus, it now operates more than 900 warehouses, which makes up about 21 million square feet of space, and employs an army of over 250,000 delivery workers, across 7,280 delivery stations spanning mainland China.

The company already has, and also plans to increase its international presence after the IPO. As of December last year, it operates 32 overseas warehouses, and opened two highly automated ones in Poland and Germany this past March.

JD.com begun its oversea venture in 2015 when it initially attempted to make expansion through heavy technological and financial investments.

JD.com also operates an affiliate e-commerce platform called Joybuy that allows users to browse merchandise in English and a variety of other local languages, and shop from mainly Chinese sources, similar to Alibaba's AliExpress.

Despite an early start and all the efforts, JD still lagged behind Alibaba in terms of global expansion. The latter's cross-border units Lazada and AliExpress hold significant market share in Southeast Asia and Europe respectively. AliExpress is also picking up pace across the Americas.

The temporary setback does not dissuade JD from its ambition of oversea expansion. "We are very confident to bring our successful experience in logistic, supply chain and technology to the world. Over the past few years, we have built up 'bridges' and 'roads' in overseas market." wrote Richard Liu, JD.com's founder, in an internal letter, "what we need to do now is to bring all the things together to create another JD in oversea markets and help Chinese brands and merchants to grow."

JD.com has been busy in the capital markets over the past year. The Nasdaq-listed company raised about US$3.87 billion in its Hong Kong secondary listing last June, and then spun off and listed JD Health, its online health services and merchandise platform, in Hong Kong in December.

With strong logistic network and new funds raised from IPOs, the broader JD.com is now trying to restart its international expansion.

Internally, the new department is not divided to cover individual regional markets like the teams used to, but instead made up of three teams covering logistics, sales & business development, and operation. The new structure allows the new department to work more seamless together across various overseas markets.

Merchants are also increasingly focused on digital transformation to approach consumers in the wake of the pandemic. To capture the business opportunities, JD global sales signed a partnership with Visa to jointly launch an online merchant subsidies program, targeting consumers across Hong Kong, Macau, Taiwan and overseas markets. The partnership allows JD to connect customers worldwide and provide them with easy access to a wide selection of products.

In Europe, where the company entered for years but remained stagnant for a few years now due to executive scandals and unstable management, the company just gave a starting signal of expansion, with the opening of two warehouses in Pland and Germany that are highly automated, manned by advanced warehouse robots powered by computer vision.

The warehouse in Poland, right on the border with Germany, is 90 kilometers away from Berlin, and conneted to ports cross Europe via highways. Steven Huang, head of JD's international logistics, hopes that the new warehouses will serve as a blueprint as the company looks to further expand in the region, saying that "through the warehouses in Poland and Germany, we have brought our quality supply chain, logistics, and automation technologies to Europe."

Further westward, the company opened a distribution center of 18.000 square meters in Netherland's Limburg province. JD.com's facilities across Europe also serve as a base for its latest attempt to venture in to logistics-driven Software-as-as-Service (SaaS) business, in which it could provide more product marketing, sales, advertisement, sourcing services, etc. to local merchants. The team dedicated to the SaaS plans began hiring back in March, and specifically asked candidates to have knowledge and experiences in a few rival products that are similar to Shopify.

JD.com's latest push to globalize happened under the backdrop of an increasingly competitive e-commerce scene back home, where much younger frienemy Pinduoduo grew insanely fast, surpassing it in a few important metrics. But in general, the company had always wanted to be seen as a legitimate global company. JD.com set up its research lab dedicated to advanced technologies such as machine learning and robotics in the Silicon Valley roughly around the same time other Chinese companies, including Baidu, Didi Chuxing, Tencent, etc., established theirs.