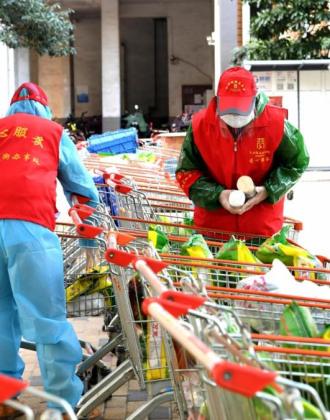 People will sign on whenever there are discounts, but many worry this could be yet another "battle of the 100 group buying companies" that ends abruptly after subsidies subside.

Just when you thought livestreamed e-commerce still has some left-over heat, the Chinese internet giants are once again moving on to the new thing: community group buying.

The sector has become the hotbed for cash pouring in from giants like Alibaba, Pinduduo, JD.com, Didi, and Meituan Dianping, to name a few, although the idea is not new. Hundreds, if not thousands of Groupon-like startup companies emerged in China at the beginning of this decade, an era referred to as the "battle of the hundred group buying companies", which happened not long before the cash burning of ride hailing companies. A few companies survived the battle, Meituan was one of them.

Fast forward to the end of this decade, the COVID-19 pandemic forced many to resort back to location-based online services for daily essentials, hence reinforced their consumption habit of relying on internet companies. During the height of the shutdown, people living in gated communities, which are quite common in China, launched spontaneous group buying efforts to source food and other necessities, avoiding visits to groceries.

As is often the case in China, internet companies and venture capital quickly caught up on the potential of community group buying as a business model. And before you realize, the sector has quickly become a battleground for these companies.

According to the public data, community group buying startups has raised nearly CNY12 billion in total 26 financing event between January last year and this November.

Meituan Dianping has regrouped its department to launch a special business division for community group buying service called “Meituan Youxuan”, and it has been expanding its own franchises and recruiting community leaders nationwide. Meanwhile, Alibaba announced that it has led a $196 million financing round for Shihuituan, a three-year-old group buying startup. Xingsheng, another startup founded in 2018, already operate in 14 provinces across the country and count Tencent as one of its early investors.

After launching a vegetable-group buying function in its app in August, Pinduoduo raised $6.1 billion last month through new shares and convertible bonds, a part of the net proceed of which will be used to expand its community group-buying business. Didi also is actively looking to grab a share of the market as well. The ride-hailing giant set up a unit dedicated to it called Chengxin Youxuan in May, which already covers more than 20 cities as of lately.

Even ByteDance, the content and social giant behind Douyin and TikTok, is reportedly planning to invest in the sector through its e-commerce department that came to being mid-2020.

"For Chinese internet giants, the idea behind entering into community group buying is not a battle to defend their core business but a bet to capture additional growth engine," internet research firm iResearch noted in a report.

Community leaders, whether those already taking a role in community management, or enthusiastic individuals, create WeChat groups to gather orders and negotiate lower prices. Local supermarket, and internet companies in this case, then ship the orders in bulk to that leader. This results in lowered logistic costs and increased efficiency for the platforms, allowing them to offer heavier discounts.

Despite the advantages, the community group buying model, however, also encounter challenges, such as varying quality for goods, geographical limitations, and sustained profitability etc.

For example, in the conventional e-commerce model, the platforms often take responsibility in making sure of the goods' quality, whereas in community group buying, leaders are being placed with more of that responsibility. Trust in the leaders will be key in the smoothness in this model, as there will be middlemen profitability for them should they negotiate under-the-table prices and purchase goods with inferior quality.

Like traditional group buying, many users were attracted to idea of community group buying for a low price. However, price-sensitive consumer may switch to brick-and-mortar stores once the subsidies subside, as were seen in the previous group buying and ride-hailing rush years ago. Therefore, the profitability and sustain user growth are the challenges for the platform in the longer term.