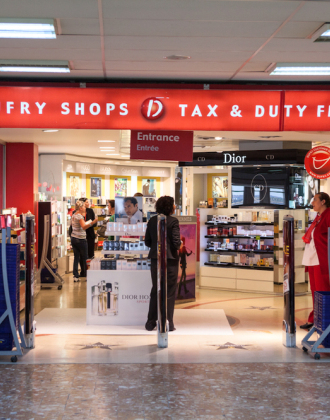 The deal allows Alibaba, which already offers an advanced online experience of duty-free shopping on its Fliggy website, to join hands with one of the world's largest duty-free retailer.

Chinese e-commerce giant Alibaba has aligned with Switzerland's Dufry to explore duty free retail, an important aspect of the booming domestic and inbound travel market in China that had been left largely untapped by Chinese tech companies.

Like most foreign companies setting up joint ventures in China, Dufry will hold 49% in the new company while Alibaba will have a 51% stake.

Alibaba has also confirmed a plan to purchase up to 9.99% stakes in Dufry, an Alibaba spokesperson said in a statement to PingWest.

The new alliance come at the time when the COVID-19 outbreak imposed major impact on the China’s outbound tourism market.

The market grew exponentially to 149 million trips in 2019, up 15% from 2018. China National Tourism Administration reported that the outbound spending of Chinese tourists at their travel destinations is also increasing, exceeding 130 billion US dollars in 2019, up 13% in 2018. The market is expected to exceed $163 billion by 2024.

However, that prospect has been shunned as the world battles the spread of COVID-19, which originated in but was already contained in China. Meanwhile, domestic tourism is expected to get a major boost, as a report from Ever bright Securities pointed out that roughly $275 billion in annual overseas traveling expenses could go back home due to travel restrictions being used as a COVID-19 countermeasure world-wide.

China's duty-free retail market possess huge growth potential, seeing a year-over-year growth of 31% to 51.6 billion RMB or $7.6 billion in 2019, according to Li Dan, a senior analyst at Zheshang Securities.

In Hainan Province, a popular domestic destination that has favorable policy towards duty-free shopping, shops in city centers and airports generated over 7 billion RMB in sales between July and September this year.

In late June, China's Ministry of Finance announced a new rule to raise the annual per capita quota for offshore duty-free shopping in Hainan from the previous 30,000 RMB to 100,000 RMB. The categories of products allowed to be sold also expanded from 38 to 45 to include electronics and perfumes.

Alibaba and Dufry joined hands to explore the growth opportunities at a time when an estimated 600 million Chinese citizens were traveling domestically during the country's eight-day-long National Day holidays. Everbright Securities noted in a recent analysis that "the partnership is a powerful combination of Alibaba's digital capabilities and Dufry's travel retail supply chain."

The investment bank commented that from Alibaba's point of view, Dufry's supply chain will help Alibaba to make strong foray into travel retail business and increase its footprint in the sector's offline supply chain. Meanwhile for Dufry, Alibaba partnership not only help it to digitized operation for its duty free shops.

Everbright also analyzed that the deal can better position Dufry in its ongoing expansion in Hainan.

Dufry is seeking to shore up its balance sheet as the pandemic severely hit global travel. It has lost its status as the world's top duty-free operator by revenue in the first half of the year to China's state-owned China Tourism Duty Free Group. The Swiss company entered China in 2018 but currently only operates a few shops in major cities including Shanghai, Chengdu, Hong Kong, and Macau. With Alibaba as a strategic partner and an investor, Dufry is expected to gain an important ally in expanding its presence across China.

What's worth noting is that this is not the first time Alibaba has its fingers in the duty-free retail business. The Hangzhou-based e-commerce giant operates its own duty-free e-commerce portal through Fliggy (飞猪), its travel services platform. The portal offers outbound Chinese travelers an online shopping experience for duty-free goods even before reaching their destination, at a time when most of the duty-free shopping around the world focuses on physical stores in airports and select shopping centers.

However, Alibaba needs to partner with existing duty-free retailers, much like in the deal with Dufry, because the business requires state-issued licenses. Besides a select few foreign companies, only state-owned duty free retailers including China Duty Free Group, Wangfujing Group, and Lingnan Holdings have it.

“Alibaba-Dufry Partnership could also introduce a strong competition into a market that has been dominated by the state-owned firms China Duty Free Group. However, we think that the partnership still imposes a limited challenges to stated owned firm at present, thus we expect that we cannot see a higher level competition in the sector in the short term.” Everbright Securities said.