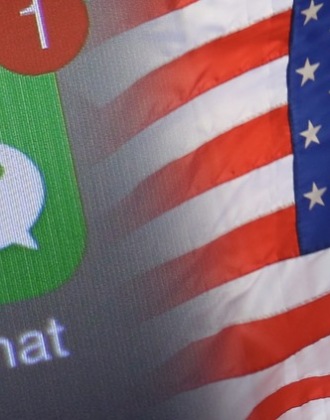 "If we rally against unfair treatment, we will be invincible."

The original Chinese version of this article, written by Lian Zi and edited by Vicky Xiao, appeared on PingWest's Chinese edition on October 1. With contributing report by Rebecca Ren & Chen Du of PingWest English edition.

On the morning of September 20, a federal judge in California suspended the Trump administration's ban on WeChat, an instant messenger-turned-super app that also supports payment, online shopping, timeline-based social media, commercial marketing, and multiple other features.

The WeChat ban took millions of people in the Chinese diaspora community, who rely on the app to communicate with friends, families and colleagues in China, and operate local businesses, by surprise. People were stunned by the news, rushing to find, largely in vain, alternative apps that are not blocked in China.

The favorable ruling means that WeChat remains temporarily unblocked in the US before situation possibly takes another swift turn in the future.

US WeChat User Alliance (USWUA), a New Jersey-based non-profit organization started by Chinese American lawyers, was largely credited with the monumental legal campaign, which resulted in the landmark ruling.

Behind the campaign was the tireless effort of more than 60 Chinese American legal professionals, donations from more than 10,000 members from Chinese diaspora communities across the US, and much more, PingWest has learned.

Clay Zhu, a Californian attorney who has been practicing law in the US for more than 20 years, told PingWest that after studying the August 6 executive order, he found that it would have a severe impact on WeChat users in the US.

He was among the people who immediately realized the severity of the situation, as he was contacted by many of his clients, bombarded with inquiries, and dragged into a dozen Telegram chat groups — all on the same day of the executive order.

Zhu said that one of the major warning signal was the language the ban order used, that it referenced another executive order issued in May last year, which potentially exposes individual users, most of whom are innocent average citizens and foreign nationals, to incredibly high legal risk.

"Violating the order could carry a fine of up to $300,000 as well as significant jail time." Zhu concluded.

An idea of a legal challenge of the executive was formed, as Zhu shared his thoughts on the executive order and its implications within a chat group of close to 200 Chinese American lawyers.

Within 48 hours of the order, five lawyers, including Zhu, decided to step up as initiators of the campaign, knowing the remarkable difficulty they might face, taking the US government head on as Chinese Americans, an ethnic group that are already being targeted heavily by the administration's since the US-China relation soured and the pandemic raged across the country.

These lawyers argue that the ban order violated the US Constitution and the Administrative Procedure Act, as the administration did not go through appropriate procedures of soliciting public opinions before issuing the order, and that the policy was not made to limit the harm.

"You don't burn down the house when you have ants in your kitchen. You'd use pesticide," said Zhu, adding that if Trump does think WeChat is flawed and poses a risk, he could very well order it to rectify, instead of shutting it down completely.

A legal challenge is the only way to achieve results, according to the initiators. The initiators developed a strategy quickly, and a website explaining their plan and calling for donations to fund the campaignwas set up. They split teams, with two lawyers studying the case, and the other three focusing on grassroots organizing. All of them made the decision to step back from their day jobs and instead focusing entirely on the legal campaign.

The campaign was met with decent response but a mediocre donation amount — $37,000 in the first week, less than half of the $100,000 they were asking in order to retain a top litigation lawyer.

Many in the communities raised questions why the case would cost this much, to which Cao Ying, one of the original five initiators, waited until the favorable ruling was delivered to let off steam.

"This campaign was really hard. There was very limited successful cases like this throughout history. The order involved a great deal of complex and uncommon legal issues with respect to the Constitution, as well as laws including The International Emergency Economic Powers Act and The APA. This case required us to put in extraordinarily long hours to handle," said Cao.

The initiators were nearly hopeless and was on the verge of deciding that they would argue in court themselves, before Michael W. Bien, a co-founding partner at Rosen Bien Galvan & Grunfeld, a well-established law firm in San Francisco, decided to litigate the case in court for USWUA, giving the plaintiffs a generous 30% discount.

In the initiators' eyes, Bien's commitment to the case was beyond what was asked of the accoladed attorney.

The administration's detailed ban order, in the form of a Commerce Department document, was made public on Friday September 18, two days before the ban was scheduled to go into effect.

Bien, together with his team, spent nearly an entire weekend of Rosh Hashanah, the Jewish New Year, preparing arguments and legal documents, and argued on a remote court hearing, in order to fit the Northern California District Court's tight schedule for the case.

Some 50-plus Chinese American lawyers practicing in the US also volunteered for the campaign across many aspects of the entire process. Ms. Li, a representative for USWUA who would like her full name omitted due to privacy concerns, said that this is the first time in decades she has seen this many Chinese American lawyers group up and work closely on one case.

Li told PingWest that in addition to Bien and his firm, the aforementioned Chinese American lawyers, and the five original initiators, lawyers from Davis Wright Tremaine LLP, where former US Ambassador to China Gary Locke was a long time partner and advisor, also contributed a lot to the legal campaign on a pro bono basis.

"These are not ethnically Chinese lawyers. They don't want a dime from the USWUA," said Li, who just had her first meal 10PM that day when interviewed by PingWest, "We are very grateful for the help from our peers."

The campaign did receive its fair share of criticism.

Abraham Yu, who works at Texas-based law firm Yu, South & Associates, claimed in an article posted on WeChat that the USWUA's lawsuit against the Trump administration was for money and fame. "Through establishing special 'friendships' with Tencent and China, ultimately unimaginable benefits will be brought to them," Yu wrote.

He concluded that the reason USWUA filed the legal challenge in Northern California District Court was that the court has a tradition of overturning Trump's executive orders.

Like Yu, many questioned the initiators' motive, with some even accusing them of representing the interests of the Communist Party of China. Situation got out of control as Zhu and his colleague Ni Fei's private information, including home addresses, was leaked online, resulting in them and their families receiving threats daily.

"If they feel that what we are doing is not right, they can form their own organization to defend the ban. This is their right. Likewise, we have the right to sue the Trump administration," said Zhu.

The initiators kept the details of their fundraising public, redressed multiple times that USWUA is not in any way connected to WeChat or Tencent, and that the entire fundraising process is being audited by trusted organizations.

The landmark ruling significantly boosted the communities' confidence in USWUA. As of September 21, two days after the ruling, the non-profit stopped taking in donations last month after raising from more than 15,000 donors one million dollars, which, according to the initiators, is sufficient for them to respond to the Trump administration's appeal to the Ninth Circuit Court to reinstate the ban.

For the moment, what's more important, and worth celebrating for the initiators of USWUA and WeChat users in the US, is that the ban is ineffective, so vital communications for the Chinese diaspora communities can remain unhindered.

"This is a rare grassroots legal action in the history of Chinese Americans. Regardless of the final result, it demonstrates the strength of unity." Zhu said, "If we rally against unfair treatment, we will be invincible."

The lawyers were pleased to know that the ban on TikTok was also called off by the DC District Court a week after their own case's ruling. In the ongoing legal challenge filed by ByteDance, the owner of TikTok, the plaintiffs are arguing the against the TikTok ban in a nearly identical way the USWUA has argued the WeChat case.

Meanwhile, their own case is far from over.

Zhu worked till late night on the day of this year's first US presidential debate between Trump and Joe Biden. He had been working on a legal reply to the Trump administration's latest counterattack in court. He foresees many late nights, just like this one, for his colleagues.