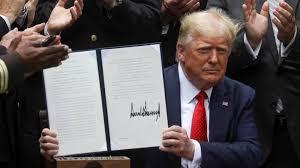 Trump ordered that in 45 days, or on September 20, any person or business under the jurisdiction of the US will be banned from any transactions with the two apps, their respective maker, i.e. Tencent and ByteDance, and any subsidiary of these two companies.

US President Donald Trump signed two Executive Orders on August 6, banning WeChat and TikTok, two popular social media apps made by Chinese companies, in 45 days after the date of the orders.

Trump claims that WeChat, the Tencent-made hybrid of instant messaging, social media, and payment solutions, poses data privacy and human rights abuse concerns by surveilling on both its American users and Chinese users traveling to the US, and reportedly censors content deemed by the China.

Trump ordered that in 45 days, or on September 20, any person or business under the jurisdiction of the US will be banned from any transactions with the two apps, their respective maker, i.e. Tencent and ByteDance, and any subsidiary of these two companies.

The ban will be carried out by the Commerce Department. However, details of the bans, such as what actions constitute "transaction" as mentioned in the Executive Orders, are still vague at this point.

For example, Tencent owns minority to majority stakes in pretty much every well-known games publishers and developers, many of which are US companies. Los Angeles Times reporter Sam Dean tweeted that he has confirmation from the White House that the WeChat Executive Order will be WeChat-only, and not affecting game companies with Tencent ownership.

Should the US government wants to go to the greatest lengths — by using the two apps, which technically happens after users entering into user agreements with the service providers, they have made transactions with the two companies. Therefore, the most extreme result of these two Executive Orders could be a de facto ban of the two apps in the US.

To circumvent that potential ban, US users could also technically register additional Apple ID/Google accounts in other countries, such as Canada, to download the banned apps. However, the Executive Orders did mention the following, which could in theory render the aforementioned countermeasures illegal.

Sec. 2.  (a)  Any transaction by a United States person or within the United States that evades or avoids, has the purpose of evading or avoiding, causes a violation of, or attempts to violate the prohibition set forth in this order is prohibited.

(b)  Any conspiracy formed to violate any of the prohibitions set forth in this order is prohibited.

This is a developing story.