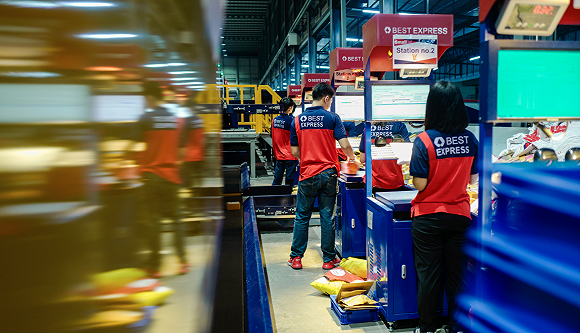 Now a number of these companies are taking a closer look at global expansion, especially in Southeast Asia, as oversaturation in domestic market causes profitability to decline.

Best Express (百世快递), a Chinese delivery company founded in 2003, announced in early July to officially begin serving consumers and businesses in Malaysia, Cambodia, and Singapore under the company name BEST Inc., increasing its number of countries covered in the region to five, together with Thailand and Vietnam, which the company already expanded its services to prior.

The company offers shipping from Yiwu, Zhejiang, a major manufacturing hotspot in China, to Kuala Lumpur in Malaysia in three days, including arrival, custom clearance, transit shipping, and local delivery.

It claimed that it can achieve 3-day delivery with relatively low cost and good service quality by setting up its own delivery networks, hiring local couriers, instead of working together with local logistics companies, which often result in spotty service and ultimately cost more.

SF Express, China's largest player, was the earliest to enter Southeast Asian market, covering Singapore in as early as 2010, and expanded its footprints  in Malaysia, Vietnam, and Thailand during the past years. It also owns 25% of Myanmar's KOSPA Limited, an integrated logistics company that specializes in transportation and warehousing, through a strategic investment of 4 million US dollars.

ZTO signed strategic service deals with Cambodia Post, the country's state-owned postal system in April, 2018, and finished construction of its dispatch center in Cambodia that could handle as many as 50,000 packages per day. JD.com, one of China's leading online retail companies, also expanded its self-operated logistics network to Thailand with the launch of its e-commerce website JD Central in the country.

Southeast Asia has long been considered a hotbed for cross-border e-commerce by Chinese entrepreneurs. Estimated market size will reach $8.78 billion in 2025, up 1,626% from 2015, with Indonesia set to become the largest country market with 52% of the region, according to a report jointly released by Google and Temasek.

Chinese delivery companies' expansion in the region is aligned with the regime, whose head of State Post Bureau Ma Junsheng said at a conference that China will start building a global postal system, supporting a China-led initiative of free trade zones in 2020.

However, the speed of their expansions relies heavily on their cargo aircraft fleet size, as the US the top company, SF Express, only operates a fleet of about 50 aircrafts, approximately one tenths of that of FedEx or UPS.

The US government was previously reported in February to have considered halting sales of aircraft parts, especially engines, to China, to restrict the flow of sensitive technology to private sectors that could be picked up by the Chinese military due to dual-use policies mentioned in initiatives like Made in China 2025.