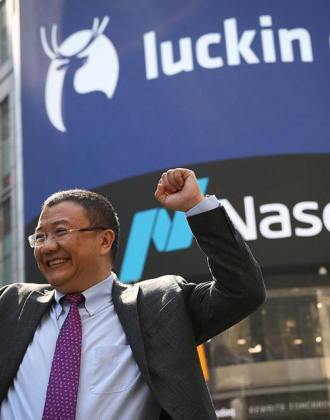 Charles Lu, together with two members of his inner circle, and Sean Shao, the independent director who led the investigation that exposed Luckin's fraud, were removed from the board.

During a special shareholders' meeting on Sunday July 5, Lu Zhengyao (Charles Lu), chairman of the board at Luckin Coffee, was ousted from the scandalous Chinese coffee chain that once challenged Starbucks, PingWest has learned.

Lu, together with Li Hui, founder of Centurium Capital, and Liu Erhai, founder of Joy Capital, both of whom among Lu's infamous inner circle, were removed from the company's board of directors.

The board also voted to remove Sean Shao, an independent director who led the internal investigation that exposed the company's 2.12 billion RMB sales fabrication, from his position.

Two other people with legal backgrounds, Zeng Ying and Yang Jie, were appointed as independent directors during the special shareholders' meeting.

Lu, Li, and Liu was commonly referred to as Lu's "iron triangle"—three businessmen who worked together in-depth to raise fund for China Auto Rental, Lu's prior venture which later morphed into UCAR Inc.

The trio was previously exposed by reports by PingWest's Chinese department to have replicated what they did with UCAR Inc., namely extensively utilizing affiliated transactions to squeeze money out of entities they own, on Luckin.

Qian Zhiya, Luckin's ex-CEO, and Liu Jian, ex-COO who was exposed in the investigation to have directly ordered the fabrication of sales numbers and fired for the actions, both worked for UCAR Inc.

Tencent News reported that Lu presided over the special shareholders' meeting with autocracy by overruling multiple objections from shareholders, claiming that as the chairman of the board he was able to do so.

Specifically, Lu denied shareholders' request to hear the opinions of Luckin's lawyers for its entity registered in the British Virgin Islands on the voting right owned by Primus, another BVI entity registered under Lu himself but currently controlled by liquidators. Primus holds about 131 million Class B shares (6.5% of the company's total issued shares) with 10 times the voting right of Class A shares.

Summer Fame, a shareholder under Qian Zhiya, proposed to treat Primus' shares as Class A shares, which triggered an objection from the Primus liquidator. Lu was reported to have called the lawyers without being in the meeting room where all shareholders are present, and returned to the meeting room in 2 minutes, overruling the liquidator's objection and proceeded to unilaterally rule Primus' shares as Class A shares.

The decision increased the combined voting right of shareholder Haode Investments, controlled by Lu, and Summer Fame, owned by Qian who acts in concert with Lu, from about 35% to 45%, further giving Lu's side an edge.

During the actual voting procedure to boot Lu, Li, Liu and Shao from the board, Lu brought the ballots outside the meeting room before bringing them back in, overruling shareholders' objections that balloting should be scrutinized by lawyers or other qualified professionals, repeating the same line "as chairman of the board, your objection is overruled." The vote passed.

Essentially, Lu ousted himself in a performative shareholders' meeting, which is actually called by himself.

A previous July 3 board meeting to oust Lu failed to get two-thirds of the votes. Acting CEO Guo Jinyi, SVP Cao Wenbao, and VP Wu Gang, all who joined the 8-people board after the sales fabrication scandal was exposed, voted against the motion during the July 3 meeting.

The company announced on Jun 26 asking Lu to resign as director and chairman of the board, indicating that his degree of cooperation in the internal investigation was not up to board members' expectation.

Despite announcing on his personal social media account that he is "taking the responsibility no matter the result of the internal investigation", Lu had attempted to clear himself by designating Qian Zhiya and Liu Jian as scapegoats. However, PingWest's Chinese department previously reported that Li and Liu had finally come into bad terms with Lu, resulting in him losing influence within the board.

Both the United States' SEC and China's Securities Regulatory Commission are looking into the sales fabrication scandal. The Nasdaq had ordered Luckin to delist twice.

The company's value has shrank by 95% compared to when its stock price was at the highest point of $51.