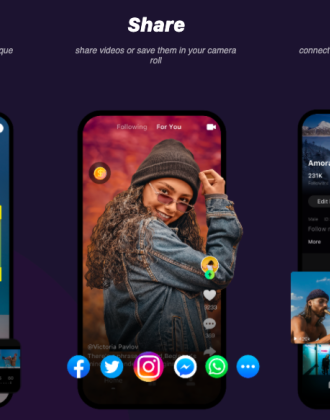 Two Chinese-made short video apps battle it out in North America. One decided to subsidize users directly with cash.

It currently holds 1st position in both ranks for entertainment apps and overall on iOS App store in the US. Zynn also recently just launched its Android version, which is currently ranking 35th on Google Play.

Behind its skyrocketing growth is Kuaishou, a Chinese internet company and a major competitor of ByteDance, who owns TikTok, paying actual cash to people who are willing to simply register on the app, watch some videos, and invite others to join.

Zynn, according to its website, is owned by Owlii, which is a Kuaishou subsidiary previously working on augmented reality technologies. A representative of Kuaishou's international department confirmed to PingWest that it owns the app.

The short video app shows features and a user interface that's nearly identical to TikTok, with a constantly replaying stream of viral videos. A small portion of the them seem to have been sourced from the internet and posted by users with no apparent link to the videos' original creators.

Kuaishou responded by saying that the company takes unlicensed videos seriously, and that it is looking into the matter, would take down videos in violation of its terms of service, and welcomes users to report such violations.

But the content sketchiness don't seem to be a problem for Zynn's users, who are most likely here for the sign-on bonuses and free cash from referrals.

The app gives each new registered user $1 as a start, and rewards them according to how long they can keep watching videos on it. A couple minutes of watch time would translate to a few hundred "points", where 100 points equals $1.

One loophole is that users aren't required to actually look at the screen to accumulate watch time. They can eventually earn cash just by keeping their phones idle, screens on, videos rolling, with some occasional finger flicking. In fact, Zynn does not have a system in place at the moment to find out who's gaming the system and who's not.

Referring one new user would instantly grant them $6, and if they keep on using the app the total reward from one referral would amount to a maximum of $20, with $10 extra every five referrals.

Users can choose to withdraw their "revenue" and deposit them into to their PayPal accounts, or instead, convert it into gift cards from retailers such as Amazon and CVS. Zynn is currently available across the globe but is only issuing payments to users in the US and Canada. Deposits would show as coming from Kwai, the name of Kuaishou's another prior short video product for the international market that is trailing far behind TikTok.

The app’s rating is only 3.8 out of 5 on App Store, with much complaints on the mistake of amount of money users should earn and the problem of cashing out. However it is already slowly taking over other social networks, with users posting their referral codes in attempts to grow their revenue. One user even posted screenshots that he/she has made more than a thousand dollars on Zynn.

A Kuaishou representative did not answer PingWest's request for comment on Zynn's promotional budget, length of the promotion, but she did respond to one question about system abuse, saying that future mechanisms will be implemented to make sure people are staying for the content, rather than the free cash.

Kuaishou reportedly completed a $2 billion funding round last year led by largest outside shareholder Tencent with the participation of its existing investors, growing its valuation to close to $30 billion.