Thanks to Tencent, Gamers in China Now Have a Worthy AI Opponent 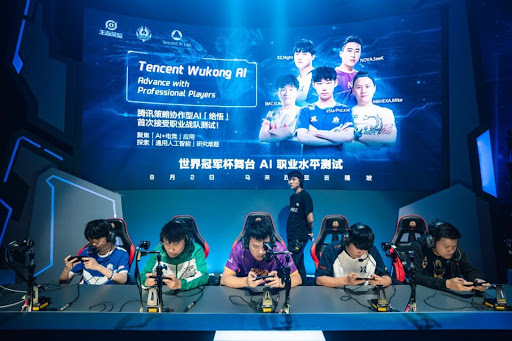 It's been nine months since Tencent announced its gaming artificial intelligence named Wukong (绝悟) defeated a professional team of e-sports players in a five-versus-five Honor of Kings match. Launched in August, 2019 during China Joy, WuKong AI achieved won 99.8% in over 2,100 games against human players.

More recently, Tencent made the Wukong AI available for the general public to play against for the first time since last year. Millions of casual gamers in China finally got a chance to test their skills against the AI in a special gaming mode during China's Labor Day holidays.

The new game mode was well received among gamers. One posted on Weibo that playing against the new AI enemy enhanced his skill set, and better trained him to instantly react.

Wukong AI, which is based on Tencent's deep neural network technology, instead of conventional gaming AIs that are based on scripts, feels significantly less 'mechanical' and more intelligent, according to gamers. "Wukong AI is a master of the game. It is near impossible to achieve its level of plays even if one spends thousands of hours to train," said one gamer.

Like Google's AlphaGo, the AI that defeated the world's top Go players, WuKong AI learns to the game by playing against itself.

WuKong AI must not only learn to plan, attack, and defend but also to control skill combos, and coordinate with their team to capture the opposing team’s turrets and base.

According to a recent research paper issued by Tencent AI Lab, Wukong AI uses deep reinforcement learning, an approach widely used in developing neural networks to take on gaming. Computer programs generate series of game scenes to train the AI. "Wukong AI is learning in a Tabula Rasa environment where no human data nor any content is built in, it uses a learning model based on 'self-observation and deep learning' and pratices 400 years of playtime per day," said a Tencent representative.

Developed by the Tencent AI Lab, WuKong AI aims to use games to improve its learning capabilities and make them more like human. The lab has also open-sourced the deep reinforcement learning algorithms for other AI researchers and gamers to try out.

Zeng Guohao, a LOL pro gamer living in a gaming house operated by Bilibili, said that his team practices for hours every day. Members of the house are divided into first, second tier, and trainees, with those on the lowest level receiving the least training resources and attention. Top players train in matches with peers often, something that trainees can hardly participate in.

However, with the help of deep learning-powered AI, these lower-tier players could get into a match with worthy opponents anytime they want to improve their skills.

"Tencent is pushing the development of gaming AI for more practical reasons. Advance in gaming AI can not only improve pro-gamer skills, normal players' gaming experience, but also improve the game and technology development as a whole." Zheng Xuan, an analyst at Niko Partner told PingWest.

“If AI can learn, analyze, understand, reason, and make decisions in real-time in such a complex environment, it can play a greater role in a changing and solving complex real-life situations,” said Yao Xing, leader of the Tencent AI Lab and a VP at the company.

According to Yao, Tencent plans to use Honor of King's game environment and related deep learning source as a foundation for future AI model training.

China now has a gamer population of over 500 million, making competitive gaming a booming business. Esports-related sales in China reached 80 billion RMB in 2019 and there as much as 5,000 e-sports teams operating in an industry that now employs 450,000 people, according to Gamma Data, a Chinese research company focusing on video games.

Allowing AI research to tap into esports and video games in general, one of Tencent's strongest areas, could in return more effectively bolster its leadershipin the area. In China, Tencent is holding tournaments for League of Legends and other games packing tens of thousands of people into a stadiums for live streamed competition watched by hundreds of millions of people.