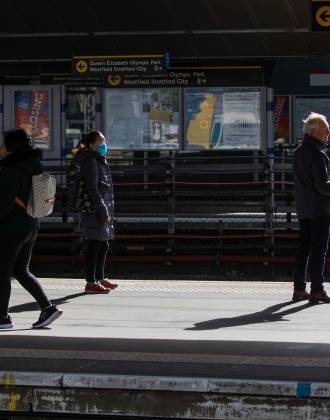 Some Chinese diaspora in the US believe that the US shortage of PPE is partially due to their previous donations to China, hence they now have a responsibility to help the US however they can.

In the early days of the Covid-19 outbreak in China, due to the lack of protective equipment in hospitals, some medical workers had to salvage what they had and use make-shift personal protective equipments (PPE) while the most unfortunate others had to go into the battlefield without adequate protection, which eventually led to more than 3,000 medical workers being infected with the SARS-CoV-2 virus and close to 40 died.

Across the Pacific Ocean, having witnessed the chaos caused by the scarcity of PPE in China, the Chinese diaspora community immediately realized the same predicament the US has been facing as the pandemic's epicenter shifts from Wuhan to this side of the ocean. "Today's New York City is Wuhan a month ago. Medical workers are running naked," said one Chinese student in US.

Charged with empathy, value, and care for their local communities, many began to raise PPE for the US. "China is where we come from, and the US is where we settle. If any side is in trouble, we will spare no effort to help," said Zeng Cheng, vice-chairman of the US-Sichuan Chongqing General Association, an immigrant advocacy group established by people from the south-western Chinese province of Sichuan and Chongqing Municipality.

In early March, as confirmed cases in Seattle began to surge, multiple US tech companies, including Facebook, Amazon, Google, Microsoft, etc., started to require or encourage their employees to work from home. As a big portion of the Chinese diaspora community are working in tech, many realized a same trajectory the US is on compared to China.

"Since then, we realized that the pandemic might spread rapidly across the US. Based on our experience, with the sharp increase in the number of confirmed cases, it definitely will be challenging to keep up with the PPE demand in the short term. The inventory is limited, so American hospitals may encounter the same," Ju Hui, Head of Wuhan University (WHU) Alumni Association in Northern California, told PingWest.

Indeed, the demand for PPE has skyrocketed in the US, as hospitals are rapidly running out of their limited stockpile. according to Reuters.

On social media, healthcare workers have called on others to donate any masks, goggles, or other equipment using the trending hashtag #GetMePPE.

The shortage of proper PPE will eventually hinder the ability of medical workers to fight the spread of the deadly coronavirus and put their own lives at risk. As the epicenter of China's Covid-19 epidemic Wuhan, the provincial capital of Hubei, was placed on lockdown since Jan. 23. In the meantime, medical workers in the city were facing a shortage of PPE that major hospitals had to post messages on social media, completely bypassing local and national public health authorities to call on the public for donations.

At that time, Santa Barbara-based Direct Relief offered generous help to Wuhan. With the help of US-based alumni from Huazhong University of Science and Technology (HUST) and Wuhan University (WHU), both top local universities, the non-profit raised significant quantity of PPE. Since the end of Jan., Direct Relief donated batches of PPE to Wuhan. The non-profit had up till now donated nearly 800,000 N95 respirators and surgical masks, more than 400,000 pairs of medical rubber gloves, and large quantities of protective coveralls, face shields, and shoe covers to China, according to data from its official website.

Now, the same groups are now working together to help Direct Relief restock medical supplies for US hospitals. According to the non-profit, their mask inventory fell from 1 million in early January to 8000 at the end of March.

Speaking to PingWest, Su Hai, Head of HUST Alumni Association in Northern California, said that his organization is partnering with fellow alumni groups from Wuhan University to help Direct Relief screen qualified manufacturers in China so that Chinese-made PPE can be send to the US as soon as possible.

Ju told PingWest that as it would take a while to raise a sufficient number of PPE for Direct Relief, and the current goal is to offer financial support. "This is a kind of showing our empathy," he said. Many members of the WHU and HUST alumni associations in North California originally came from Hubei and knew very well what was going on there, none of them wish to see the tragedy reoccur in the US, despite it already happening.

That effort has not gone unhindered, as China largely still bans export of PPE in large quantities, with the exception of government-sanctioned export, despite the national daily production capacity exceeded hundreds of millions across respirators, masks and protective suits. Some European countries had to lower their requirements so that masks made in China can be imported.

"In late January, we joined hands with HUST alumni to launch a fundraising campaign with the initial idea of ​​supporting Wuhan to combat the pandemic. However, the situation in the US became severe, therefore, after further discussion, we decided to donate a portion of the fund to Direct Relief (as part of its effort to offer help in the US,)" Ju told PingWest, adding that WHU and HUST donated 150,000 and 50,000 to the non-profit, respectively.

A significant portion of people in the Chinese diaspora community believe that partially due to their previous immense donations to China, the US has to face a shortage of PPE, hence they have a responsibility to help the country they reside in to overcome difficulties.

"Currently, China is getting safer and safer, it's the right time to support the US, the country we live in and love," the owner of a Telegram group formed by Chinese diaspora from Hubei said in the chat. Other members are of the same opinion, saying raising supplies and money for the hospitals in their communities is an obligation.

"Of course, we would also hope that the public can maintain a positive attitude towards us Chinese. We care about the communities just as anybody would, and we have a great sense of responsibility," Ju explains, adding that the US President Donald Trump's previous labeling of the coronavirus as the "Chinese virus" may expose the Chinese diaspora community to increased discrimination and xenophobia.

As the confirmed Covid-19 cases skyrocketed in the US, an increasing number of folks use foul language to accuse the Chinese online and on streets. A report from L1ght, an Israeli company that specializes in measuring online toxicity, suggests there has been a 900% growth in hate speech towards China and Chinese people on Twitter.

Trump's comments were reminiscent of the late 1800s when Chinese Americans were deemed the "yellow peril," despite living in the United States for years, John C. Yang, president and executive director of Asian Americans Advancing Justice, said.

Michelle Zhang, founder of The Society of Heart's Delight, a Silicon Valley-based Chinese immigrants community, told PingWest she is worried that the pandemic will cause the unemployment rate to soar in the US, and the xenophobia towards Chinese immigrant workers might be increasing. Besides raising medical supplies for California hospitals, Zhang is also working on a campaign to unite people in her community to reduce discrimination and misunderstandings towards Chinese.

"I'd like to make every effort to help restore normal life and economy as soon as possible," Daniel Liu, a Chinese immigrant who has lived in New York for more than 20 years, told PingWest.

The forty-year-old man is organizing a local PPE donation campaign to support the hospital in his community. He firmly believes that the destiny of Chinese immigrants is closely tied with the US, and the public should notice that they are an indispensable part of society.

"We are uniting other Chinese immigrants groups and doing our part to support the US to combat Covid-19, and more actions will follow," Ju and Su said resolutely.