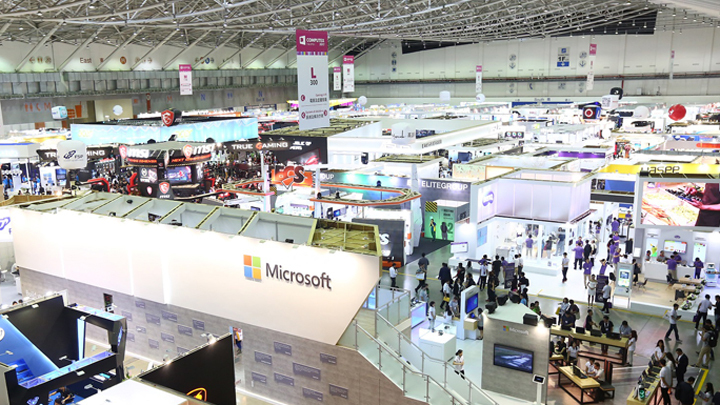 While Taiwan's homegrown PC brands fade away in the market, Computex Taipei, the once globally celebrated IT industry show is also losing its originality and popularity.

"There’s no doubt that Computex Taipei is ‘fading’, since the life cycle of many exhibition is limited, and they need to be developed through continuous iteration." Liu Xin told Pingwest. Back in 2008, he participated in the exhibition for the first time as a fresh reporter.

Computex Taipei, also known as the "Taipei International Information Technology Show," was established in 1981 when IBM launched the world's first PC. It's an annual event, as of May 2019, 39 exhibitions have been held.

"When consumption tends to become more civilian, except for the computer show, more diversified channels come out for people to get aware of technology. As for the manufacturers, they are no longer obsessed with launching the latest products through the show," said Liu, "Comprehensive factors like the transformation of consumer trends, the shift of capital, the weakening of consumer electronics, and the life cycle thing, resulting in the relative decline of the Taipei International Information Technology Show," he added.

The disappearance of the once popular CeBIT and COMDEX is a convincing proof, which is also in line with Liu's words. Therefore, don't be astonished if Computex Taipei fades away one day.

PC era can be described as Computex's heyday. The exhibition used to be one of the most crucial platforms for significant PC manufacturers around the world to present their strength annually. At that time, each flagship product exhibited has outlined the direction of the entire industry.

In the past years, Computex Taipei once shared the reputation as the world's top technology exhibitions with CES and MWC.

The year 2010 is the 30th anniversary of the information and technology show. Data unveiled that the scale of the exhibition that year has reached a record high—1,715 manufacturers shared 4861 booths, meanwhile, in the first three days of the show, the number of international visitors reached 29,000. From June 1st to 2nd, 116 large foreign firms with an annual turnover of more than $50 million to participate in the exhibition; later, the transaction amount broke the record, reaching $232.11million (NT7.3 billion).

In the following years, Computex Taipei continued to refresh its past achievements.

In 2012, 1800 exhibitors came to the show, and the number of visitors approached 130,013. However, in the same year, global PC shipments waned for the first time, and the Computex has begun to fade as well. As for 2013, although the visitors remained unchanged or slightly increased, the number of exhibitors and booths descended.

Based on a robust semiconductor industry chain, a series of powerful technology companies was born in Taiwan, moreover, with the help of the global PC framework led by Intel and Microsoft, Taiwan local brands like Acer and Asus quickly went global.

According to the statistics released by the local industrial intelligence research,  these companies account for about 89% of the world's total laptop production, and they produce 46% of the world's desktop computers (including OEM).

However, Gartner, a research and advisory company, tells that Acer PC global sales fell by 7.9% in 2018, ranking fifth, with a market share of 6.1%; global sales of ASUS PC dropped by 13.5%, accounting for 6% of the total market share. The data from Gartner and IDC all point to the same fact that although the global PC market shipments declined for the seventh consecutive year in 2018, the shipments of Lenovo, Hewlett-Packard, and Dell increased respectively.

Lenovo, Dell and Hewlett-Packard, the three major PC manufacturers, no longer regarded Computex as one of the most influential platforms to show their latest products.

At the same time, the rise of mobile devices and new technologies such as AIoT, V/AR, 5G, etc., has also brought the decline of Computex Taipei.

"Computex Taipei has tried to make some change, aiming to build a fresh ecosystem for global technology. However, the ecology of AIoT is not complete, and there are still too few things to see," Liu Xin told PingWest. "Compared to a decade ago, it is hard to have products that really change the world on the platform," he added.

Li said that AMD released the latest processor at the exhibition, while Intel is not willing to show its weakness—after waiting for five years, the 10nm chip has finally been released. The competition between AMD and Intel has become a rare highlight of the Taipei Computer Show in recent years.

"If it wasn't for this information that accidentally came into the moments of my WeChat, I almost forget that Computex Taipei is going on," said a technology media CEO.