How does appliance giant Midea bulk up robotic arms for Tesla and the entire EV industry? 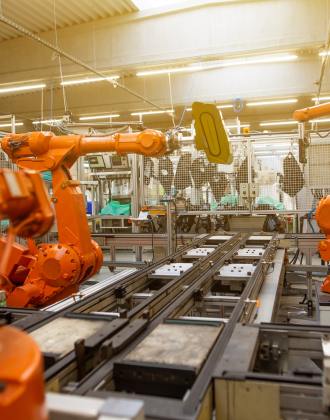 The robotics and automation division of the well-known Chinese air conditioner maker brought in 27.3 billion yuan in 2022.

At first glance, electric vehicle manufacturing and home appliance production may appear unrelated, yet a Chinese appliance giant has crossed the line and become a production powerhouse not just for Tesla but for the entire EV industry.

Over the last two weeks, speculation has grown concerning a prospective Cybertruck mass manufacturing run. And KUKA, a robotics company financed by Chinese manufacturing powerhouse Midea, is an important piece of evidence supporting the theory.

“66 KUKA production line robots arrived in Houston on the 18th,” Twitter celebrity @greggertruck first broke the news. “The Kuka robots have been used on all Tesla production lines; it just makes the most sense to be in reference to Cybertruck at this time,” he continued.

This is a fair assumption to make. Along with some FANUC robots, Kuka, the company best known for automated industrial robotic arms, makes up the bulk of Tesla's production line. Electrek revealed last year that Tesla had received a large consignment of Kuka robots to the Gigafactory in Texas, where they will be utilized to develop the Model Y assembly lines.

Known as one of the four major industrial robot brands, KUKA is not only an integral part of Tesla's manufacturing infrastructure, but it has also been adopted by other major automakers like BMW, Daimler, and Audi. The other three brands are FANUC, ABB, and Yaskawa Electric. According to Online Robotics, FANUC is famous for its strength in CNC systems; ABB is the leader in control systems, programmable logic controllers, industrial PCs, and collaborative robot solutions; Yaskawa is known for its servomotors and motion controllers; and KUKA specializes in system integration applications and on-body manufacturing.

Thanks to the booming EV industry, Midea's robotics and automation division, which primarily includes KUKA and Swisslog, brought in 27.3 billion yuan in revenue for the company in 2021, an increase of 26.37% from the previous year. In 2014, KUKA bought Swisslog, a company that provides automated healthcare systems as well as automated warehouse solutions.

“Our team has accomplished a remarkable turnaround and charted a clear path for growth,” Peter Mohnen, CEO of KUKA, said. Prior to this, KUKA's sales had been falling, from 27.145 billion yuan in 2017 to 20.652 billion yuan in 2020.

Much of KUKA's growth came from China. In 2021, revenue from the country climbed by 48.4% compared to 2020, and orders increased by 39.0%. Also, the turnaround shows that Midea's years of investment in and support for KUKA are bearing fruit, and the traditional manufacturing company is gaining more synergy with cutting-edge manufacturing.

Back in 2015, the air conditioner behemoth set its sights on developing innovative manufacturing skills, and KUKA, headquartered in Augsburg, emerged as a “tempting prey”:

●      In August of 2015, Midea bought 5.4% of KUKA's equity in the secondary market for the first time, and then gradually increased its holdings to more than 10%.

●      In July 2016, it brought out a full takeover bid for KUKA and loaded another quarter of KUKA's shares into its pocket.

●      In 2017, it raised its stake in the German industrial robot maker to 95%. Gu Yanmin, Midea's Group Vice President, emphasized the importance of the robotics and industrial automation business, saying that Midea aspires to become a leading force in the field, just as it has in the consumer appliance and HVAC sectors.

●      In 2018, Midea set up a joint venture with KUKA and established a production base in Shunde, Guangdong.

According to the earnings report, KUKA's automotive customers in China, the world’s largest EV market, grew by more than 100% year-over-year in 2021. “By collaborating with Midea, KUKA is boosting its competitiveness,” Wolfgang Meisen, KUKA's Head of Corporate Communication, told Xinhua on the sidelines of Automatic 2022, an exhibition for smart automation and robotics in Munich. “The Asian market, mainly the Chinese market, is currently the biggest growth driver of the automation sector worldwide,” he said.

According to Hong Jiran, an analyst at Everbright Securities, approximately 50% of KUKA's production is currently completed in China. In Shanghai and Shunde, KUKA also has nearly 400 people working in R&D. They work in collaboration with the R&D staff at KUKA's German headquarters, shortening the development cycle of a new robot from 24 months to 15 months.

In addition, the synergy effect has also been reflected in Midea's conventional business. In 2021, KUKA delivered more than 1,000 robots to Midea, and “these numbers will continue to grow,” said Hongwei Li, CTO of KUKA China.

“Our goal is to reach 530 robots per 10,000 employees in 2023.” “In the first half of 2021, we had  320 robots per 10,000 people,” the executive said. He believes KUKA is able to assist Midea and many other Chinese manufacturers in automating their production, thereby raising the penetration rate of robotics and narrowing the gap with developed countries.

Midea and KUKA management have developed a joint growth strategy with the aim of significantly sharpening the latter’s role as a leader in robot-based automation by 2025.

Through raising its bets on KUKA and deepening collaborations, Midea's automation and robotics business has grown from virtually nonexistent to an industry leader. Furthermore, “taking KUKA private will help localize its business in China and create stronger synergies with Midea,” said Hong, adding that he is optimistic about Midea's robotics sector, which has the potential to grow as a result of the wave of automation and digitalization.

Midea is also promoting KUKA's lightweight hygiene robots for the food, pharmaceutical, and electronics industries, as well as Swisslog's automation and robotics solutions for logistics and healthcare. It is estimated that KUKA's revenue in China would account for more than 30% of overall revenue in 2025, with linked businesses earning around 10% net profit.

Midea's archrival, Gree Electric, entered the high-end manufacturing field in 2012. However, instead of acquiring an industry leader as Midea did, the Zhuhai-based behemoth has taken the path of independent R&D. It offers products covering CNC machine tools, industrial robots, intelligent warehousing and logistics, factory automation, and other fields. Compared with Midea, its automation and robotics industries are still in their infancy.

Photo by Simon Kadula on Unsplash