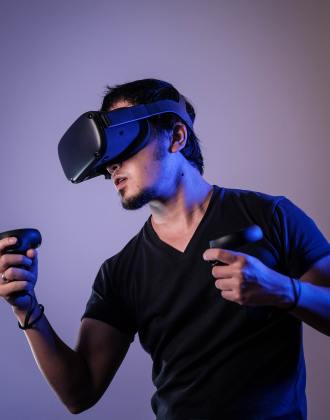 A mountain of mint virtual reality (VR) headsets is building up on China’s second-hand online marketplace as users' interests in the metaverse waned.

On Xianyu, users can find thousands of VR headsets marked as 95新 (95% newly used), nearly untouched, or even unsold. The majority are Pico Neo 3 models.

Pico, a VR reality startup acquired by TikTik owner ByteDance in August 2021, launched NEO 3 in China in May last year with the intention of providing a potential alternative to Oculus for users who don’t want to buy into Meta’s ecosystem.

NEO 3 supports over 100 VR games and more than 50 other apps on the Pico Store. It utilizes Qualcomm’s Snapdragon XR2 platform and has optical controllers and WiFi 6 functionality.

Pico asserted that in May of last year, the initial batch of Neo 3 was sold out on China's e-commerce platform JD.com within 24 hours of its debut at a starting price of 2,499 yuan, but consumers can now get an almost brand-new Neo 3 for a discount of more than 60%. During the last six months, the beginning price of the new Pico Neo 3 has dropped from 2,499 yuan to 1,599 yuan in China.

Similarly, the value of several sought-after VR headsets, such as Meta's Quest 2, has decreased drastically too.

The steady drop of VR headset sales parallels the trend of declining consumer sentiment in China due to the metaverse's diminishing utility and relevance.

In Beijing’s upscale SKP district, a 28-year-old white-collar worker named Zhang, who was shopping at the Pico Store, said he did not think either the Neo 3 or the Neo 3 Link were very innovative. He noted that the cost of current VR technology was disproportionate to the benefits it provided and the health hazards involved with using VR headsets. The use of these headphones may result in eyestrain, headaches, and motion sickness.

Online comments also lamented the lack of immersive experiences and appropriate content for VR headsets, stating that "one of the most glaring flaws of virtual reality is that the technology necessary for an immersive experience has remained elusive."

Virtual reality and augmented reality are widely regarded as the underlying technologies to support the application and adoption of Metaverse.

Despite an initial surge in usage of the buzzwords, interest in both virtual realities appears to be sharply declining, Baidu's keyword research showed.

According to the Chinese search engine, interest in technology and terms hit its peak when Facebook rebranded as Meta and started committing to the digital future. Since then, however, the number of occurrences of the phrase has decreased as corporations have yet to introduce ground-breaking improvements to the notion.

Despite the stagnation of the VR market, Chinese venture capitalists have increased their investments in the sector.

Metaverse projects raised a combined 22.8 billion yuan in 339 deals from venture capital firms between July and September this year, of which virtual reality startups that specialize in VR headsets accounted for 79.6% of the total number of deals, according to the Chinese corporate database Qichacha, a signal that venture capital firms are still bullish on the sector as they focus on long term development rather than speculating on short-term value appreciation.

In comparison, the third quarter venture capital investment in the VR sector was much higher than the total amount raised in full-year 2020 figures, when the combined fundraising of China’s VR and AR startups totaled 2.1 billion yuan in 54 deals.

The increased investment in VR by Chinese venture capital firms occurred at the same time that low user engagement impacted once-hyped companies such as Meta, which reported a second consecutive quarterly sales decline and fired off 11,000 employees.

Meta’s Reality Labs, responsible for developing metaverse-oriented technology like VR headsets, reported a $3.67 billion loss in the third quarter of 2022, which is the third straight quarterly loss after losses of $2.9 billion and $2.8 billion in the year’s first and second quarters, respectively. Going forward, Meta said it expects operating losses at Reality Labs to grow significantly in 2023.

China’s VR market is still in its infancy and has ample possibilities for growth. According to data from International Data Corporation (IDC), global shipments of VR headsets increased 241% year-over-year to 3.56 million units in the first quarter of 2022, with the Chinese market accounting for a negligible portion by shipping only 257,000 headsets, a 14.8% year-over-year rise. For the full-year's figures of 2021, the global market for augmented reality and virtual reality (AR/VR) headsets jumped 92.1% year-on-year in 2021, with shipments reaching 11.2 million units, according to IDC.

Meta's Quest 2 was by far the most popular product, accounting for 78% of the combined AR/VR market during the year. ByteDance's Pico VR products ranked third with a 4.5% share.