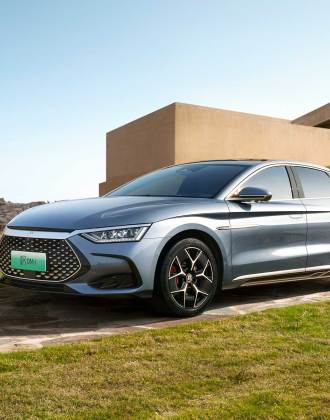 Chinese electric vehicle maker BYD has begun expanding one of its production bases in Shenzhen, as part of its efforts to strengthen the supply chain to meet growing demand.

The new project is the second phase of BYD's industrial park in Shen-Shan Special Cooperation Zone. The main buildings of the phase 1 has almost been completed.

The second phase of construction, which will cost 20 billion yuan (US$2.9 billion), is scheduled to commence operation in July 2023. Upon completion of the construction, the facility will work as a supportive core parts manufacturing base to BYD Auto's NEV production. It will produce components for 600,000 electric cars per year on an area of 3.79 million square meters (40.8 million square feet), aiming to generate annual sales of 100 billion yuan.

Unlike Tesla and domestic rivals Nio and Xpeng, which sells only pure-electric vehicles, BYDs manufactures and sells both pure-electric and plug-in hybrid cars. Most of BYD’s models are priced between 100,000 yuan and 200,000 yuan, about half the price of Tesla’s cars.

Based in the southern Chinese city of Shenzhen, BYD has been on an upward sales trend this year, with EV shipments rising each month since March. BYD sold 174,055 units in August, which was 7.3% higher than the 162,214 units sold in July and 188% up from the same month last year.

While sales have continually grown, BYD’s shares are experiencing a more volatile year. Berkshire invested US$232 million for 225 million BYD shares in 2008, but it offloaded 1.33 million shares at an average of HK$277.10 (US$35.31) apiece, which was worth roughly HK$369 million on August 24

Like many other Chinese EV makers, BYD targets overseas buyers by announcing its entry to several overseas markets in recent months, including UK, Denmark, Germany, Israel, Japan and Cambodia.

Guangzhou-based XPeng and Shanghai-headquartered Nio have already exported their EVs to European markets such as Norway and Germany. Li Auto said it was considering setting up production facilities in Europe.