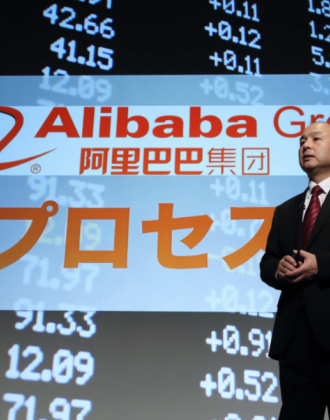 SoftBank, the largest investor of Alibaba, posted a net loss of $23.83 billion in Q2.

SoftBank, which experienced a massive loss in the second quarter, is strengthening its cash reserves in order to withstand the challenging market environment.

The Japanese conglomerate said on Wednesday it will reduce its stake in Alibaba to 14.6% from 23.7% by settling prepaid forward contracts.

The settled prepaid forward contracts correspond to a maximum of about 242 million American depositary shares in Alibaba, or about 9% of the total outstanding shares of the Chinese company. SoftBank said it expected a contribution to pretax income equivalent to about $34 billion as a result of its Alibaba share transactions.

In a filing to the Securities and Exchange Commission (SEC), the company said it "will be able to eliminate concerns about future cash outflows, and furthermore, reduce costs associated with these prepaid forward contracts," by settling the Alibaba share contracts. "These will further strengthen our defense against the severe market environment."

As of June 30, the Alibaba holding accounted for about one-fifth of SoftBank’s net asset value, SoftBank said.

As tech stocks continue to take a battering in the face of increasing interest rates and recession fears, SoftBank posted a net loss of 3.16 trillion yen ($23.83 billion) in the second quarter, a record quarterly loss, compared with a profit of 761.5 billion yen a ($5.74 billion) year earlier.

Several of SoftBank's portfolio firms, including the US food delivery platform DoorDash, the US Real estate brokerage Compass, and the South Korean e-commerce giant Coupang, saw their shares decline substantially.

As the global financial markets cooled down, SoftBank has also scaled back its investment activities. Its investment arm, the Vision Fund, approved just $600 million in new investments in the first quarter, compared with $20.6 billion a year earlier.

Tiger Global, one of the world's largest hedge funds, lost 24.7% in the second quarter, bringing its loss in the first half increased to 50% from the end of last year.

At its height, SoftBank had a 25% stake in Alibaba, making it the Chinese e-commerce giant's biggest investor. Masayoshi Son, founder and CEO of SoftBank, invested $20 million in Alibaba back in the year 2000, when the company was still in its early stage.

In recent years, Alibaba's market value has shrunk from more than $700 billion at its peak to around $240 billion today due to China's strict regulations on big tech companies and worsening Sino-U.S. ties.

Two weeks ago, the SEC placed Alibaba on a delisting watch list, requiring it to comply with US audit regulations or be kicked out of US exchanges as early as 2024.

While Alibaba has said it will actively cooperate with regulatory requirements to maintain its US listing, it is also preparing for the worst-case scenario — a possible delisting.

The dual primary listing will go into effect at the end of the year, allowing Alibaba to remain listed on the Hong Kong market even if it is delisted from the New York Stock Exchange.

Foreign investors are considering narrowing their exposure to Chinese stocks amid concerns about the economic outlook and political noise. In June, the South African newspaper group Naspers announced that it would reduce its stake in Tencent. The company holds a 28.78% stake in Tencent through its Amsterdam-listed subsidiary Prosus NV.