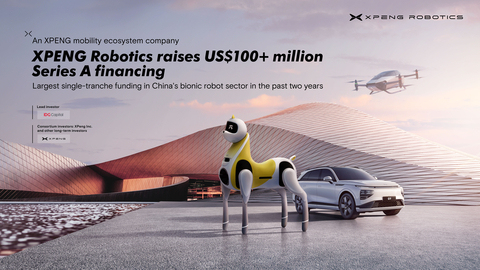 In a press release, XPeng Robotics said that the money would be used to strengthen its research and development investment in robotic hardware and software, recruit talent, accelerate product development and boost technology and product competitiveness.

It's the largest single-tranche fundraising for the bionic robot sector in China in the past two years, the company said.

Xpeng Robotics' first product is a four-legged robot that can move around safely and quickly with autonomous navigation capabilities. Equipped with the first household-use robotic arm, it can act as a companion with the ability to care, entertain and transport.

The company expects its consumer-oriented intelligent robots to enter households in the next two years, enhancing daily living and bringing about significant lifestyle changes.

“I also believe that in the future, manufacturers of smart cars will also be manufacturers of smart robots, creating 1+1 >2 synergy,” said He Xiaopeng, Chairman and CEO of XPeng. "As part of our mission as a technology innovator and explorer, we will continue to provide support to XPENG Robotics. This will generate more synergy as we build our mobility ecosystem through this strategic partnership.”

Founded in 2016, Xpeng Robotics currently has R&D centers in Guangzhou, Beijing, and Silicon Valley. As of June 2022, it has more than 300 employees, 80% of which are R&D personnel, integrating expertise in key fields such as robotics, artificial intelligence, automotive design and manufacturing.

Xpeng isn't the only EV maker foraying into robotics. In the U.S., its rival Tesla is developing a humanoid robot called Optimus, which the company says will go into production next year.