China’s VR industry wants to leap into success, but now it might only be taking baby steps 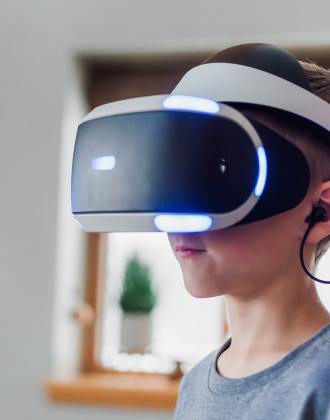 The second wave of VR devices is coming. Is the Chinese VR industry ready for the booming?

In the beginning of late 2021, the global market for VR/AR headsets had soared in a way unprecedented since 2016. VR/AR headsets’ global market value grew 92.1% year over year in 2021, with shipments reaching 11.2 million units, according to a recent report by International Data Corporation (IDC).

The same report points out that “headset shipments are forecasted to grow 46.9% year over year in 2022 and will experience double-digit growth through 2026 as global shipments of AR/VR headsets surpass 50 million units by the end of the forecast with a 35.1% compounded annual growth rate (CAGR).”

Chinese tech companies have sniffed out the opportunity and are jumping on the bandwagon as well. In late August 2021, with a whopping 9 billion yuan ($1.5 billion) deal, TikTok owner ByteDance acquired Pico, the third-largest VR headset maker globally at the time. In January 2022, China’s social media and gaming giant Tencent was rumored to acquire mobile phone maker Black Shark for $470 million, which is known for its expertise in providing a smooth gaming experience by utilizing Qualcomm chips, which have been used in almost all the major VR products such as Oculus, HTC Vive, and Pico. Last month, Alibaba led a 60 million USD financing round for Chinese AR company Nreal, establishing success in Asian and European markets. Meanwhile, iQiyi, a video streaming platform that started banking on VR in 2016, is continuing to roll out new products and upgrade its content ecosystem.

Currently, the Chinese DPVR and Pico, each capturing a 5.1% and 4.5% global share of the market, are ranked as the second and third most popular VR brands in the world. The latter has expanded its business outside of Asia, to North America and Western Europe, places dominated by Meta at the present. Pico also recently announced it will raise its annual sales goal from 1 million units to 1.8 million units, while heavily marketing the product on its own Douyin app.

As major players have stepped into the ring, riding the wave of metaverse hype, will VR finally clear its name, reviving from the 2016-2017 gruesome demise, and transition from a niche market to a mass one? Let’s take a trip down memory lane before we discuss VR’s future.

The first wave of VR hype in China was kicked off by HTC. On March 1, 2015, Taipei-based telecommunications company HTC unveiled its VR device, HTC Vive, in partnership with American gaming company Valve Corporations. “The launch of the first generation of HTC Vive has inspired a wave of (VR-related) entrepreneurs,” says Qian Yu, Managing Partner of QingYanZaiWu Artificial Intelligence Fund, who has been following the VR industry since 2015.

In the first quarter of 2016, a total of 18 Chinese start-ups secured funding by connecting their business to the then sizzling VR concept. Massive amounts of money were poured into the industry, evidenced by Storm Magic Mirror, a VR sub-brand of video player software maker Storm, banking 230 million yuan ($34.8 million) in its B series financing. However, many of the VR products at that time were crude. In 2016, the overwhelming majority of the 300,000 mobile VR headsets sold on TMall during the shopping fest cost less than 30 yuan, similar pricing to that of Google Cardboard in the West, according to Forbes.

The inflated VR bubble quickly bursted as China’s securities regulators tightened control, prohibiting public companies whose main business is vastly different from VR to raise capital via follow-on share issuance to invest in the VR-related companies. In the following months, only a few VR start-ups were able to secure funding, as investors hold a cautious attitude towards VR.

Two years later, as China’s MIIT(Ministry of Industry and Information Technology) began holding the World VR Industry Conference in Jiangxi Province, VR industry practitioners once again saw positive signals from regulators. In September 2019, Huawei, one of China’s most prominent tech companies, rolled out Huawei’s VR glasses, which became one of the spotlight products that year. Huawei’s move motivated other players in the industry, “they saw that VR still has hope,” says Qian.

Although VR is recovering from its previous demise, with an even bigger ambition this time, it faces a critical obstacle in promoting its products — the previous wave of poorly made, crude, and non-user friendly VR headsets have scarred consumers in China.

“They left negative impressions for the customers, so much so that customers aren’t willing to try new VR products from roughly 2017 to 2021, because they still think of VR headsets as the ones made out of cardboards,” says Zhong Wenjie, representative of iQiyi’s Qiyu VR.

The obstacle has prompted VR companies to invest more in marketing and upgrading their VR content, in hopes of attracting new customers. With support from iQiyi, Qiyu already has large amounts of movie and TV content, including the classic Avatar in 3D. After the launch of Qiyu 3, Qiyu also started to concentrate on its VR games. There are currently over 70 VR games in the Qiyu ecosystem, including hardcore survival games like Arizona Sunshine, as well as family-friendly ones like Lucky Fish Bread. Qiyu has also launched a series of VR interactive dramas, letting users explore the plot in a Sleep No More way.

According to Qiyu, it ranked second in terms of 2021 annual shipments, and first in 2021 Q4 sales. Qiyu also divulged that the company has its sales goals for 2022 increased from that of 2021.

As Qiyu’s key competitor in China, ByteDance heavily relies on its own Douyin to promote Pico, as well as advertising on a number of China’s hit entertainment shows. Currently, there is one Pico flagship store in Beijing, around 200 distribution stores in China, and 50 Self-service VR experience spots in malls and supermarkets.

DPVR, although ranked the second most popular VR brand in the world, and the most popular in the Asia Pacific region with a 22% market share and shipment growth of 50.8% year on year, per IDC, is growing steadily in markets such as Hong Kong, India, Japan, Korea, and Singapore, yet little known in the Chinese consumer market. Unlike Pico and Qiyu, DPVR’s business is mainly B2B(business-to-business), not B2C(business-to-consumer). DPVR may be unfamiliar to consumers in China, yet it is a key player in the education and training sector.

In many regions in China, such as Guizhou and Shaanxi, DPVR headsets are used in classrooms to give students a novel experience of learning through VR, including subjects such as astronomy, biology, language, sports, and even emergency drills. According to guidance jointly released by Xi'an Education Bureau and Xi'an Emergency Management Bureau, elementary schools and middle schools are required to have a vacant space dedicated as a “safety education sharing classroom”, VR headsets are not only used to simulate earthquakes and fires but also to teach students first aid methods such as Heimlich, bandaging, cardiac resuscitation, etc.

In addition to schools, DPVR has also been used for China’s “party-building”. Party building, also known as 党建 (Dang Jian), is a process of development to the leading role of the Communist Party in the country, in terms of emphasizing the builds of ideology, the forms of its organization, the rules of governing and so on. One of the party building session is a series of party history lesson for the grown party members, as well as Young Pioneers, mostly for children aged six to fourteen. Recently, China’s National Academy of Administration Audio and Video Publishing House has launched a metaverse “party-building” project, allowing multiple users to conduct meetings, learn history of CCP, “experience redness”, etc, with VR headsets from DPVR.

“At present, the entire trend, including the relevant national policies, have a considerable tilt (towards VR),” says Gu Kai, regional distributor for DPVR.

In 2020, China accounted for 54.7% of commercial and consumer spending on VR and augmented reality worldwide, per IDC. Yet, the ownership rate of VR devices in China has been dropping consecutively for the past years. The rate for consumers ages 20 to 49 dropped to 13% in 2020, from the previous 21% in 2019, according to an eMarketer report quoting Buboy Paguio, technical creative director at AKQA.

The difference between China’s VR market, and that of the US, which is home to Meta’s Oculus, is not the hardware, but the content, according to Zhong. “For example, there are hundreds of excellent games in Quest, whereas there’s only more than 70 in Qiyu,” says Zhong.

Investors seem to share a similar view. “A popular view in the industry is that on a scale of 100, Chinese VR headsets such as Pico score only 15 points less than Quest. The difference is not on hardwares, but the usability and details,” says Qian. Even when the difference is considered rather small, VR is still more widely accepted by American consumers because “for them, a 299 dollars VR headsets takes up a smaller portion of their income compared to around 2000 yuan for Chinese consumers. So naturally, Chinese consumers will expect more from their purchase,” Qian claims.

Qian’s claim echoes that of consumers. On Zhihu, a Quora-like online forum, users often complain about the heaviness and dizziness they feel with VR headsets on, as well as the controller drifting problems. “I wouldn’t play the same game with my friend who uses Quest 2, because that gives him an unfair advantage,” Pico user Frank jokingly says.

While drifting can be resolved by recalibration, the dizziness, heaviness and other physiological discomforts users may experience are harder to tackle. VR headsets inevitably need to become lighter and slimmer, bringing a whole new experience in a revolutionizing way, according to Qian.

Revolutionizing VR headsets is no easy task, and is unlikely to be done by a single company or any single VR headset maker, as it might need to combine all sorts of cutting-edge technologies such as chip-manufacturing, cloud computing, AI, VR, 5G, etc. In an ideal setting, researchers and scientists across all related sectors can join forces and innovate a new VR headset solution, for VR headset makers to utilize and promote. At the time being, VR companies are focusing on enriching the ecosystem, bringing more easily adaptable contents such as movies, TV shows, and fun games to their platforms, in hopes of turning VR from a niche market to a relatively known one. Qian predicts that in the future 5 to 10 years, a revolutionizing solution will surface, then VR companies can further expand, and join forces with top content makers such as large-scale 3A game developers to turn the relatively known market into a mass one.

After all, just like Qian says, “the Stone Age could never achieve what is to be accomplished in the Bronze Age,” the VR industry might need to take a few more baby steps before it can make big leaps.

Photo by Jessica Lewis on Unsplash