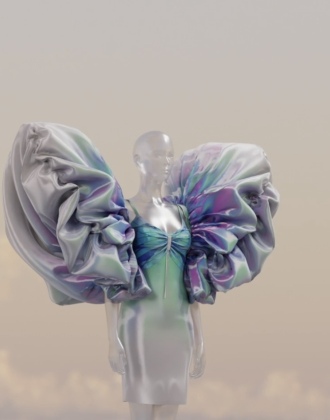 The women-centric social network is at the forefront of adopting digital fashion powered by NFTs.

Chinese photo and video sharing app Xiaohongshu is undoubtedly the pioneer in embracing NFTs fashion. Now, the company is working with fashion designers to launch digital clothes for its online fashion week.

The fashion week, which runs from April 15 to April 30, comprises a variety of events, including online launches of new designs by brands, users sharing their outfits, virtual apparel releases, etc.

According to the company, the digital apparel launch event kicked off on April 18 with new designs coming out every three days, 4-5 collections at a time. 9 top Chinese designers will collaborate with R-SPACE to launch virtual clothing for Xiaohongshu users.

Launched by Xiaohongshu in last November, R-SPACE is a digital art platform that allows qualified users to publish or purchase digital collectibles within the social app.

It is still unknown which blockchain these fashion digital assets are stored on. Previously, blockchain news outlet The Block Beats reported in February that R-SPACE rolled out a limited digital collection of Winter Olympic Snowflakes based on Zhixin Chain, a compliant and open alliance chain led by Tencent.

Founded in Shanghai in 2013, Xiaohongshu is one of the fastest-growing social platforms in China, with more than 200 million monthly active users, of which 80% are female. Thanks to the female-dominated social network atmosphere, NFT collections paired with fashion brands garner a lot of attention on its platform.

Non-fungible tokens (NFTs) are a new form of digital asset. The ownership of these assets is documented on a blockchain, which is a digital ledger similar to the networks that support bitcoin and other cryptocurrencies.

With the ability to combine games and fashion, NFT has won the hearts of the younger generation and opened up new opportunities for the fashion industry. Not only is Xiaohongshu testing the waters, but luxury fashion brands with deep pockets such as Gucci, Burberry, and Louis Vuitton are doing so.

Last May, Gucci released an exclusive drop, a digital version of its bag, and sold it on Roblox for about $4,115. Burberry and Louis Vuitton have created collaborations with Blankos Block Party and Beeple, respectively, to release video game-related NFTs.

The Chinese government has tightened rules related to cryptocurrencies, cracking down on transactions, mining, and more, but purchasing and collecting NFTs are not illegal in the country. Under the rules, buyers have to purchase NFTs in Chinese yuan, rather than cryptocurrencies, which are banned.