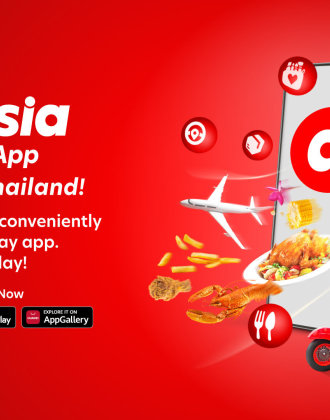 As the pie of Southeast Asia's digital economy grows, AirAsia might emerge as a major player.

Don't underestimate Malaysia-based AirAsia: it's not just a budget airline, it's a tech company that has joined the super app war led by Singapore's Sea Limited and Grab and Indonesia's GoTo.

Now, the company is planning to change its name to Capital A to reflect the expansion of its business portfolio from core air carrier service to food delivery, ride-hailing, fintech, and beyond.

Although AirAsia has been positioning itself as an internet company since 2015, it only became more focused on expanding its non-airline business after the coronavirus pandemic outbreak paralyzed air travel.

In October 2020, the company announced the transformation of airasia.com into a comprehensive lifestyle platform. "Just like how we built AirAsia as a brand, airasia.com will emerge as the ASEAN super app, your best travel and lifestyle companion," said Tony Fernandes, CEO of the group.

Since then, AirAsia has aggressively extended its presence in the super app race. It launched ride-hailing services AirAsia Ride in Malaysia in April and acquired Indonesian ride-hailing giant Gojek’s Thailand operation in July. Amanda Woo, chief executive of the super app unit, told Nikkei Asia that the service will expand to Thailand this year, followed by Indonesia and the Philippines. "AirAsia Ride aims to become the top ride-hailing company by beating its competitors within five years," said the executive.

In June, it launched grocery delivery service AirAsia Fresh in Singapore, and in August, it acquired Malaysian food delivery startup DeliverEat for $9.8 million...A week ago, it rolled out an intra-city parcel delivery service in Bangkok.

The increasing dedication to the digital business is paying off. In the first quarter of 2021, AirAsia Digital, which runs the non-airline business, brought in 39% of AirAsia Group’s revenue. In comparison, the segment had only accounted for 8% of the company’s revenue in 2020.

Southeast Asia, which has a population of more than 670 million, is considered the most promising emerging market, with the gross merchandise value of its digital economy expected to reach $174 billion by the end of 2021.

Super apps are playing a significant part in the region's burgeoning digitalization since they all strive to bring as many users as possible into their own ecosystems, laying the foundation for long-term development. The most practical approach to shape a super app is to glue together the multitude of services available on each platform and make it easier for users to try new ones — that's how Tencent's WeChat and Alibaba's Alipay became super apps in China, and Southeast Asian firms are following the same tactic.

In a nutshell, the core of being a super app in China or Southeast Asia is being a super digital wallet, which makes practically all types of daily consumption available within one platform.

By connecting mobile wallets to high-frequency use cases like ride-hailing and delivery services, tech companies can create repetition among consumers, which leads to habits and, eventually, trust.

In the meantime, penetration of financial services remains extremely low across Southeast Asia and has motivated all super apps to build products and services in the space.

As the digital payment arm of AirAsia, BigPay has officially applied for a digital banking license with a consortium of strategic partners in July last year. Currently, it offers a range of regulated financial products, ranging from e-money and international remittance to microinsurance and budgeting. In the coming months, the fintech arm will launch several new services, including responsible credit, micro-savings, and an offering for mSMEs and freelancers.

While the Malaysian company is confident in outperforming its rivals in food delivery and ride-hailing within six months, the reality is fraught with hurdles. In 2020, Grab contributed nearly half of the total merchandise value of food delivery in Southeast Asia at $5.9 billion, followed by Foodpanda and Gojek. Meanwhile, Grab and Gojek jointly dominate the ride-hailing industry in the region.

Another difficulty that AirAsia is dealing with is financial difficulties. Due to a considerable drop in worldwide demand for air travel, the group triggered the financial distress criteria in July 2020. Stock-exchange operator Bursa Malaysia Bhd. gave the group 18 months to take steps to address the issues.

The company announced last Thursday that after the relief period expired on January 7, it lodged an appeal to extend the deadline, but the request was denied. Under Malaysian regulations, companies that are classified as financially distressed are required to submit a regularization plan within 12 months or risk being delisted from the stock exchange.

Unlike China, Southeast Asia is a diverse mix of different languages, cultures, standards of living, and market regulations, making it almost impossible for one app to dominate all countries in the region, presenting an opportunity for AirAsia. Also, as the pie of Southeast Asia's digital economy grows, AirAsia, which the CEO described as a data-driven technology company with a strong brand, might emerge as a major player.

The company's super app business unit was valued at $1 billion in October, and the company's CEO predicted that the division will produce 50% of the company's overall revenue in the medium future.