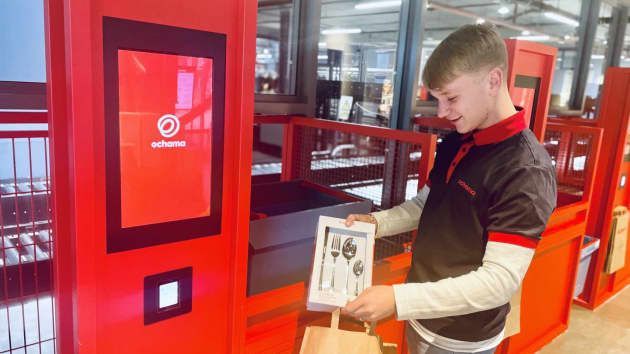 JD.com is testing a new shopping model in Europe with two robotic shops launching in the Netherlands.

Chinese e-commerce giant JD.com is testing a new shopping model in Europe with two robotic shops launching in the Netherlands.

The robotic shops are under a new brand named Ochama that combines the concepts of “Omnichannel and amazing”. Its first two pick-up shops are in Leiden and Rotterdan, with two more scheduled to open in Amsterdam and Utrecht.

JD.com said that the shopper can either use the Ochama app to order a wide range of products and receive the orders from JD’s next-day home delivery service, or they can visit the robotic shops to experience Ochama’s product assortments and see a fleet of robots picking and transfer the goods to them.

According to Pass Lei, General Manager at ochama, JD Worldwide, by taking advantage of the robot technologies in logistics and supply chain management, the new shops can benefit customers by bringing down the product price by an extra 10%.

“With the rich experience in retail and cutting-edge logistics technologies that we have accumulated over the years, we aspire to create an unprecedented shopping format for customers in Europe with better price and service,” said Pass Lei.

The launch of the robotic shops signals JD’s ambitious move to challenge the dominant position of Amazon. The U.S. e-commerce giant has launched its own cashierless grocery stores called Amazon go in the U.S and Amazon fresh in the U.K.

JD’s autonomous delivery service so far has been adopted by its omnichannel supermarket brand Seven Fresh and Tencent-backed Yonghui Supermarket to deliver on-demand order to more than 10 neighborhoods in Beijing and Shanghai.

JD Group is the largest shareholder with a 47.4 per cent stake in Dada. In 2016, JD merged its JD Daojia unit with Dada Nexus and provided USD200 million in cash to Dada Nexus, receiving about 47% of the company’s equity.

JD has increasingly expanded its oversea business operation over the past few years though its domestic business still contributes for most of its revenue. The company operates an online shopping site called Joybuy.com for international customers. It has an e-commerce joint venture in Thailand and it also holds majority stakes of Vietnamese shopping platform Tiki.