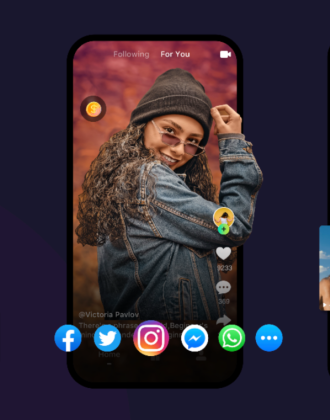 The rapid rise and decline of Zynn is part of a long fight between Kuaishou and ByteDance, the two Chinese tech giants.

Kuaishou, the second-largest short video platform in China, will shut down its TikTok clone Zynn on August 20th. The termination of the less than two-year-old app means its failure in the battle with TikTok in North America.

Rolled out in May 2020 in the US, Zynn quickly reached the top of the download charts within two months. The app's reward scheme brings explosive growth: users earn $1 for signing up, $20 for the first person they get to join, and $10 for every five users afterward. This money can be redeemed as gift cards or cash.

It drew controversy among the public, and the Nonprofit media watchdog Common Sense Media even labeled the app as a "pyramid scheme."

Due to alleged plagiarism, the app was removed from the Apple Store and Google's Play Store soon after its phenomenal expansion. Multiple well-known TikTok users their accounts have been cloned entirely, with profiles appearing on Zynn, including their name, picture, and months of back-dated content.

Although the app came back in July last year, its ranking in the download chart plummeted since then until it was shut down. As its rival, TikTok has become one of the most popular social and entertainment software in the US and Canada.

The rapid rise and decline of the app is part of a long fight between two Chinese tech giants: Zynn's parent company Kuaishou and TikTok's owner Bytedance. With the success of TikTok in the global market, the war has also extended beyond China.

Besides Zynn, Kuaishou also operates Kwai and Snack Videos for overseas users. In the beginning, to avoid head-on competition with TikTok, which holds a leading position in North America, Kuaishou entered Brazil, Mexico, and some Southeast Asian countries through Kwai and Snack Video and gained a strong foothold.

Kwai has been downloaded more than 76 million times in the first half of 2021 in countries such as Brazil and Mexico, while SnackVideo built a following in markets like Indonesia and Pakistan.

According to Kuaishou, in April, the average overseas MAUs increased to more than 150 million, and about half of the MAUs now come from Latin America. But now, under TikTok's aggressive expansion in Latin America, Kuaishou feels upset.

With a population of more than 660 million, Latin America has become one of TikTok's fastest-growing markets. According to Comscore's Media Metrix, 64.4 million unique visitors were to TikTok's website and app across Argentina, Brazil, and Mexico in July 2020. That's up from 15.8 million in January 2020 and just 5.0 million in July 2019.

Among them, Brazil experienced particularly substantial growth in TikTok usage. Also, Zhang Yiming, founder of ByteDance, said last year that TikTok's growth in Brazil is critical and required the person in charge of the region to report directly to him.

Kuaishou, who lost to ByteDance in the domestic and the US, had to launch a defensive battle. Citing sources familiar with the matter, Chinese news outlet LatePost reported that the company had prepared a budget of $1 billion to gain more users overseas, of which at least $100 million will be invested in Brazil. Kwai sponsored America's Cup, which was held from June to July in this Latin American country.

Even if Zynn suffered a failure, the Beijing-headquartered company still believes that the overseas market has great potential, especially amid the increasingly extended supervision of big techs in China.

Kuaishou intends to double its global team to 2,000 people by year's end to accelerate the launch of its international products and aims to reach 250 million monthly users outside of China this year.

"TikTok is a big front runner ahead of us today globally, but there's still huge room for growth," Su Hua, CEO of Kuaishou, said in an interview with Bloomberg.

But the market seems to have less confidence in the company. Some analysts believe that considering its scale, Kuaishou should already be creating profits rather than burning cash for user growth. Morgan Stanley, its IPO sponsor, recently downgraded its stock and lowered its target price.

Meanwhile, affected by the uncertainty of regulatory policies, Kuaishou's stock, which nearly quadrupled after its Hong Kong debut, has dropped near its offering price.