Why Chinese tech firms giving back weekends to employees? 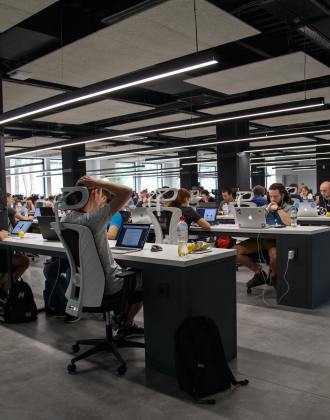 Experts believe that China's Internet industry has bid farewell to rapid expansion, and it is more important to adhere to long-termism.

Chinese tech firms are shifting away from the compulsory weekend overtime schedule once widely adopted in the industry, signaling that a healthier competitive environment may come.

Interestingly, although most dislike the weekend overtime system, some employees are still willing to stick to it. Last month, a company-wide survey conducted by ByteDance showed that about one-third of the respondents are not in favor of the change, as the practice can mean higher overtime pay.

Tencent ignited this series of modifications. Lightning & Quantum Studio Group, a subsidiary of the gaming giant, said in June that it had set a "healthy day" for employees every Wednesday, encouraging them to leave work at 6 pm. For other working days, 9 pm is set as the deadline to leave the office, and two rest days would be guaranteed on weekends.

Despite being criticized for years, overtime or "996 work culture" (from 9 am to 9 pm, working 6 days a week) is common in China's fast-growing Internet industry. Previously, some employees tried to resist the practice but achieved almost nothing.

On March 26, 2019, a website named "996.ICU" (refers to "Work by '996', sick in ICU") was launched, detailing Chinese labor laws that a 996 schedule may violate. Then, GitHub users compiled a list of companies that allegedly require a 996 schedule, including e-commerce behemoth Alibaba, Tencent, and ByteDance.

After triggering a surging wave of public opinion against the unreasonable working system, the once-renowned movement quickly slipped into silence, and none of the giants who implement mandatory overtime was punished.

However, starting this year, as Chinese regulators stepped up their crackdowns on large technology companies and public sentiment towards big platforms has deteriorated, the situation began to be different. Before potential regulation arrives, some tech firms preferred to correct the non-compliance on their own and save their image.

Earlier this year, a female employee in her early 20s passed out on her way from work at Pinduoduo at midnight and died a few hours later. Her death aroused strong public condemnation of the overtime work arrangements of China's second-largest online retailer, prompting an investigation by district officials of the Shanghai Municipal Human Resources and Social Security Bureau.

Without mentioning a specific company, China Central Television issued a comment, calling on relevant departments to strengthen supervision and protect the rights and interests of employees. "Shouldn't trade human lives for benefits," the state-owned media warned.

The abolition of weekend overtime also came weeks after China announced the three-child policy. Chinese authorities are working to improve policies and increase supports to ease the pressure on working families, as the country's fertility rate slowed to 1.3 children per woman in 2020.

Some people shared their views on social media, saying that reducing mandatory overtime is in support of policies that encourage childbirth. "Companies such as Tencent and Bytedance are sensitive to the changes in the political environment," they said.

Experts believe that this may symbolize that the development of the Internet industry has entered a new era. "Big techs in China have passed the stage of high-speed expansion. By adjusting working hours, companies can achieve the goal of optimizing work processes, saving labor costs, and improving work efficiency," said Lou Yu, professor of China University of Political Science and Law.

"It is tough for China's Internet sector to reproduce the large-scale and rapid expansion in the previous two or three years. We must adhere to long-termism," Yu Xiaohui, president of the China Academy of Information and Communications Technology, recently said at the China Internet Conference.

Wiping out compulsory weekend overtime has not thoroughly shaken the long working hour culture behind it, but it does represent the beginning of a shift to higher-quality growth.