Fiercest of rivals, best of friends: how Alibaba takes a friendly stance on Tiktok outside China 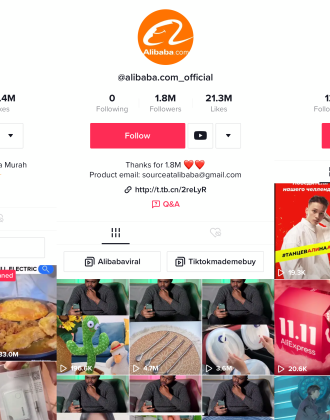 The overseas e-commerce branches of Alibaba benefit from the partnership with Bytedance's TikTok, which is radical to Douyin-Alibaba's competition in the domestic market.

Shopping via short videos is currently the hot trend in China, thanks to the contribution from short video apps like Douyin and Kuaishou that match the user with merchants and content creators based on data and algorithms.

As TikTok's domestic version forge ahead in e-commerce, it has competed head-to-head with Alibaba's Taobao and Tmall in the fiercely competitive and saturated e-commerce market in China.

Before it participated in e-commerce, Douyin provided links to major online retail platforms like Taobao Marketplace and Pinduoduo as part of its popular short video-sharing service. But the growth of the live-streamed shopping craze in China deteriorated the relationship between Chinese e-commerce platforms and short video operators amid concern that the rise of live-streaming shopping threatens the dominance of the e-commerce platform.

As a result, both Alibaba and Bytedance restrict merchants from doing business with rivals. Practice is known as "er xuan yi," or "pick one from two."

Things are different outside of China, about the relationship between the ecommerce giant and the social bohemoth.

Livestreamed e-commerce is also an emerging trend in Southeast Asia and Europe. However, it is still at an earlier stage than that of China. During the coronavirus lockdown, millions of local consumers frequently use live videos to check out products and ask questions to merchants remotely.

Alibaba.com has seen its overseas fan base grew dramatically on its TikTok channel over the past four months. It has amassed more than 1.8 million fans after posting its first video. While AliExpress and Alibaba's SEA e-commerce arm Lazada have also amassed multi-million fans in Europe and six Southeast Asian countries, respectively, after setting up various TikTok channels with localized content.

Lazada's TikTok channel is at a much more sophisticated stage than that of Alibaba.com and AliExpress. An obvious challenge for Lazada is the different culture and language in all six markets it taps into. Lazada has launched six different regional channels to cover all their target users. As one of the most popular accounts, Lazada Indonesia has accumulated more than 2 million fans and post more than one thousand videos since it started operation in March 2020.

"Alibaba has captured the early potential of collaboration with hit social media, it has partnered with influencers and popular creators to promote its product through TikTok. The business development of TikTok is still in its relative infancy in Southeast Asia compared to Douyin in China, so there is still a lot of room to grow for both Lazada and TikTok." said Deridian Nurhalim Sutiono, the content marketing executive at iPrice.

AliExpress has launched various Tiktok channels in different languages to target the European market, such as Russia and Italy. In addition, AliExpress has recruited 100,000 influencers from Russia, Italy, France, Poland, and Spain to connect with global brands and merchants which look to market their products online.

"Alibaba has increased advertisement budgets on TikTok last year, Aliexpress alone spent several tens of millions yuan on TikTok last year. Compared with Facebook and Google, the advertising expenditure on TikTok is lower, which is big incentive for Alibaba to allocate more capital to TikTok," said an advertising agency work closely with AliExpress.

Unlike its market dominance in the China, Alibaba's e-commerce business has less presence in the overseas market though.

Southeast Asia was the first overseas market where Alibaba ventured into. The Chinese e-commerce giant made significant investments and layouts in Southeast Asia since 2016 when it acquired Lazada, which was the largest e-commerce company in the region back then.

In Southeast Asia, Lazada is facing stiff competition from competitors such as Shopee and Zalora. In fact, Lazada had lost its market dominance in the region since 2019 when Shopee took the lion shares of the market and rank as the region's most used online shopping app, according to analytic and data from App Annie, iPrice Group, and SimilarWeb.

According to data compiled by iPrice, Shoppe has 550.35 million monthly visits in Southeast Asia in the first month of 2021, making it the most visited e-commerce platform in the region. Lazada and Tokopedia ranked second and third place with monthly visits of 303.16 million and 209.43 million.

Although Shopee beats Lazada in terms of monthly visit in Indonesia and Vietnam, the two biggest markets, Lazada is still the most visited e-commerce platform in Singapore, Thailand, the Philippines, etc. Nevertheless, Shopee catches up rapidly in those regions.

"This is probably the main reason why Shopee has been receiving more visits to their website recently," Deridian noted.