The World's Hottest Fast Fashion Startups Are From China, Claiming They Are Even Faster than Zara and H&M 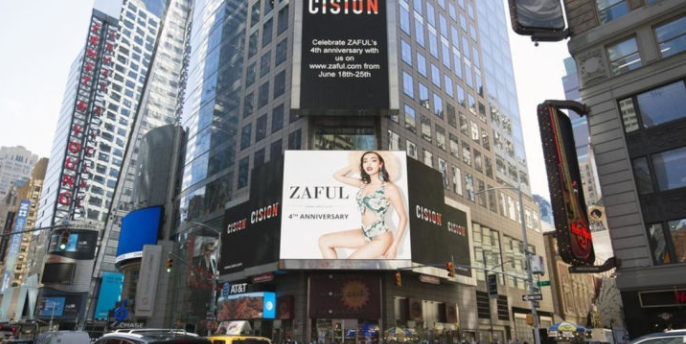 While not being domestic household names at all, Shein and Zaful are taking over the world's fast fashion scene by storm.

Chinese e-commerce upstarts Shein and Zaful may not yet be a domestic household names like the industry giants including Alibaba, Pinduoduo, JD.com, etc., but they are taking the shares of the overseas fast-fashion market at lightening speed, offering a wide variety of styles at very attractive price that may even threaten Zara and H&M.

Given the saturated market at home, many Chinese startups focus almost exclusively on overseas, seeking blue ocean markets and fill the gap left by foreign opponents. One of the best performing ones among them is Nanjing-based Shein, one of the world's biggest and fastest growing fast-fashion startups. A search for the company's name on Instagram and other popular social media pops up millions of results of younger women over the world posting their photos of clothing from the company.

Founded in 2012, the company now counts U.S as its largest market while shiping to about 220 countries. Shein most recently completed a Series E round in 2020 at over USD15 billion valuation. Founder and CEO Chris Xu scratched his previous wedding dress business and bought the domain name Sheinside.com to sell women's clothing in 2012. Then the company was renamed as Shein.

The exclusively online clothing company primarily focus on fast fashion pieces for women at prices below $20, undercutting its rival Zara by as much as 50%. Some of its often discounted items are even sold for less than $5. Besides that, Shein's other products also include men's wear, household items and cheap electronic.

Shein's business quickly surged with double digit increase in sales between 2016 and 2019, booking almost $10 billion in 2020. The brand went mainstream quickly among younger customers as app economy research company App Annie reported that Shein ranked top among shopping apps on the iOS App Store in the US, the UK, France, plus several other major Middle Eastern countries.

Shein's success can be largely credited to its social media marketing strategies as it boasts more than 10 million followers on Instagram, having partnered with major celebrities such as Katy Perry and Rita Ora, besides an army of loyal influencers.

Meanwhile, Shein's deep root with manufacturing suppliers in China also contributed a lot to the brand's fast turnout. The extremely media-shy company is known to maintain close ties with factories in Guangdong, a southern province in China that is known for being one of the country's major economic hubs and the center of the clothing industry. This allows Shein to quickly develop new items, have them produced, and shipped from its Foshan-based warehouse to the Los Angeles, London, and other major cities around the world, where its customers are, within a few days, achieving an allegedly even faster cycle than that of Zara's.

While the world are just starting to look at Shein's low-profile success stories, other Chinese fast fashion upstarts are also taking the overseas markets by storm.

Zaful, a Shenzhen-based fash fashion e-commerce company founded in 2014, sells trendy apparel online targeting mainly the US and Europe. The company initially sold swimming clothes and was able to expand its reach into fast fashion.

Similar to Shein, Zaful is aimed at femal and Gen-Z customers, and has been investing heavily on influencer marketing on TikTok and Instagram so that its trendy but low cost offerings can achieve the mass. The company also utilizes live streamed e-commerce, a promotional method that is quite popular already in China and is picking up fanfare in the West.

As of the end of 2020, Zaful had close to 40 million registers users, 23 million monthly active users and 15 million followers on its various social media accounts.

Traditionally, the fashion industry designs styles by season. New lines take months from design to end market, so brands have to predict what's going to be fashionable in the upcoming seasons. In comparison, fast fashion takes a shortcut by not making predictions at all but responding to trends happening real time. Brands like Zara and H&M have been the best players in this global industry, but their upcoming competitors from China are leveraging the same tactics with even more items, lower prices, and shorter turnaround time.

In an attempt to catch up in terms of the number of new items with its global competitors, Shein released over 150,000 in 2020 alone. Meanwhile, Zaful claimed on its website that it ships within 7 days, or half the time it takes for Zara and its peers to deliver new items from designers' table to stores.

The COVID-19 pandemic posed challenges to the entire clothing industry, cutting Zara's revenue between February and April last year by nearly half. The Spanish retailer had to shut down more than 1,000 stores as a result. Online-only brands like Zaful and Shein have not taken that much of a hit in comparison. Shein is reportedly in talks with underwriters to go public as soon as the second half of this year, while Zaful said that the pandemic has not dragged its growth.