Alleged Model 3 Brake Malfunction Stunned Driver, and the Tesla Technician Who Reproduced It 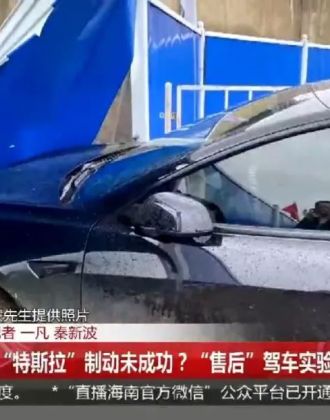 "Do we need to call a tow truck for your vehicle as well?" asked the customer.

UPDATE: according to Sina Tech's report, Tesla China reportedly went straight to the superiors of Ms. Yu, the carowner in this case, and pressured Ms. Yu into settling the case, deleting all of her social media posts questioning the quality of the vehicle in question, and accepting the result of Tesla China's investigation of the accident and its aftersales services, agreeing that the vehicle was performing normally when the accident happened.

Yu sold her Model 3 as second-hand at a somewhat discounted price, baring the cost on her own. According to Yu, part of the settlement states that she has to post a statement agreeing to settle "because Tesla China bosses told their subordinates to repost the screenshots," essentially proving to other carowners and potential customers that Tesla vehicles are safe.

Yet another Tesla accident caused by alleged technical malfunction took over China's social media, prompting netizens to call on Tesla China shifting the blame, a tactic often used by the electric vehicle company's China division when it comes to such claims.

On March 11, Ms. Yu, the owner of a new Model 3 of China's Hainan province, reported to local TV journalists that her new electric vehicle just had an accident that she believed was caused by a brake malfunction. Yu said that the alleged malfunction happened when Mr. Meng, one of her relatives, was driving at around 20-30 km/h inside the parking facilities of his workplace, trying to find a place to park the Model 3, and stepped on the brake paddle with decent force. However the car failed to brake properly, carried on forward, and crashed into the barriers.

Meng recalled that he pressed the brake paddle at least 3 times, with the last one using most of his force, but the car wouldn't come to a stop. He then called to have Tesla China sent over aftersales technicians to take the look at the car.

What followed did nothing to lessen Meng's worry. The Tesla China technician, who came to the scene on a separate Model 3, somehow decided to reproduce the accident on the exact spot, and actually hit the already broken barriers again, damaging the exteriors of the car he was driving, with Yu in the back seat filming the entire embarassment.

The technician, obviously stunned by the successful reproducing of the accident, was not recorded saying anything after the second accident. Meanwhile, Yu offered the much needed sarcasm: "Do we need to call a tow truck for your vehicle as well?"

The customers, accompanied by Hainan TV's journalists, went to Tesla China's service center in Haikou and was able to meet with the same technician. During the exchange, the customer questioned if the technician would still remember what exactly happened during his reproducing of the accident, since he was "already stunned by the crash", according to the customer's description. The technitian, whose name was unavailable, had to defer the questions to an upcoming official response from the company.

A representative from Tesla China told Hainan TV that the onboard computer of the customer's Model 3 did not show any loss of control or brake malfunction whatsoever. However, the representative did say that what happened could have been due to the car's Anti-lock Brake System, commonly referred to ABS, kicking in but at a place where the road surface was wet, causing the car to be unable to come to a full stop within a short distance.

Tesla China later on issued an official response with a step-by-step report of the entire accident (and the reproducing of it), and further concluded that both the customer's and the technician's cars were showing no sign of any malfunction from the onboard computer, which is encrypted and cannot be directly read, tempered with or deleted. The copany also showed test reports from a certified third-party testing facility, showing that both cars were working properly when the accident happened.

Meng was not satisfied with the initial and the follow-up responses from Tesla China, telling Hainan TV that he constantly fears not being able to stop the car in time and crashing into others, and had began braking at longer distances.

Tesla China is frequently blamed for avoiding responsibility when having product quality-related disputes with its customers. During one previous claim of brake malfunction, Tesla said that the user failed to operate the car properly; in another spontaneous battery fire, the company claimed that the chassis containing the batteries were damaged, although investigations into the accident showed no proof supporting Tesla China's claim; a little less than 2 months ago, when a customer's car was completely immobilzed after charging at a super charging station, Tesla China at first blamed it on the local State Grid's current being too high in a video that went viral, got a fierce denial from the power company, and later on apologized to both the customer and State Grid.

In December last year, PingWest exclusively reported on the sweatshop situation in Tesla's Shanghai Gigafactory 3, offering extensive first-hand detail on the company's unfair treatment of its workers, which might have been linked to its vehicle's various quality control claims that have been going on in China.

In February this year, four Chinese authorities and regulators summoned Tesla China over quality and safety control allegations. It later issued a response stating that it will "deeply reflects on the shortcomings of the company in the operation process" and "strengthens self-examination comprehensively."

Tesla has been a dominant player in China's EV field, selling nearly 140,000 units locally in 2020. Meanwhile, the US EV giant also has support from several local authorities to keep expanding its plants and production.