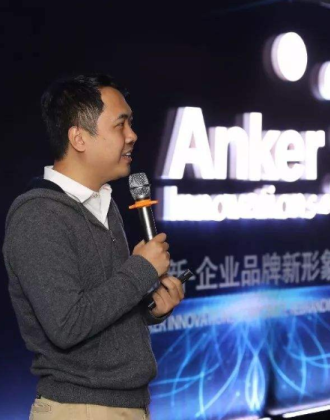 The founder of the best powerbank seller on Amazon wants people to rediscover his company, as those packaged batteries actually count for less than 10% of Anker's revenue now.

Steven Yang, an ex-software engineer of Google, has made his billion dollars fortune from selling digital accessories ranging from power banks, cables, chargers and various other tech gadgets.

Yang founded Anker in 2011, the market capitalization of which is at more than 70 billion RMB after making its debut on China’s growth enterprise market last year. Anker has very low presence in the Chinese domestic market outside of tech nerds as more than 90% of its revenue came from overseas market, where the company has earned its reputation as the most popular brand of portable power banks on Amazon.

Yang had been pondering how to build a brand that makes reasonably priced accessories since 2011 when he quit his job at Google. The business idea for what later became Anker came out by accident from an online browsing experience when he tried to buy a laptop battery for his wife. After scouring Amazon, he couldn’t find a new battery from a third-party supplier with decent enough ratings. Instead, he was put in a situation where he had to pay extra for unnecessary items in order to get the battery.

With this problem in mind, Yang tried to find suppliers in China to manufacture good quality products and sell it for $40-50 each on Alibaba. After tryout of his product for market predication, he rounded up some ex-colleagues, and successfully convinced them to pool some savings together, and created Anker, a brand that primarily focuses on developing and selling portable power banks, chargers, cables, etc. through Amazon. The idea came in at a good time when the quality and life expectancy of smartphone accessories such as cables made by top brands like Apple don't match with their premium prices, and those phones died easily too due to a matrix of reasons that include extended usage and stagnant battery technology, giving ample opportunities for accessory makers like Anker.

The company sells similar smartphone accessories of near-identical quality of that of Apple's and Samsung's, but often for $20 cheaper. For example, a huge business opportunity came in 2016 when Apple decided to not sport a standard 3.5mm headphone jack on its latest iPhone 7 models, as Anker quickly began producing cable adapters to help consumers adjust while saving them a decent chunk of money, since first-party adapters are often ludicrously pricy.

“With the increasing popularity of smartphone, it was obvious that charging has become a problem. Slow charging speed, easily broken cables. I figured out market demand and I decided to quit my job at Google and went back to China to start our venture. However, when I started, many domestic factories were less willing to improve product quality amid cost control, that’s why we set up our first R&D center in Shenzhen to offer better solution-not only improve product design but also quality.” Yang recalled.

Just one year later after its establishment, Anker achieved profitability and was recognized by Amazon's customers for high quality and reasonable price.

In 2014, Anker expanded its brand presence after creating a lipstick portable powerbank that quickly earned its popularity among female consumers and topped rivals to become the best-selling portable battery charger on Amazon for three consecutive years.

Beside its charging accessories, Anker has also expanded its product offering into categories like headphones, speakers and other smart home devices.

The idea behind the expansion is not only due to the company's expanding scale , but also Yang's anticipation of the changing landscape in the charging sector as he forecasted both more competition and the fact that wired and wireless charging technology is advancing, making powerbank no longer a solid necessity in the future.

In 2019, Anker booked a total revenue of 6.6 billion RMB, of which its charging business lines contributed 4 billion RMB and wireless audio and other smart home appliance products making up the remainder.

Its 2020 Q4 financial reports also indicated the company is on the right track to maintain its business growth as the quarterly revenue rose 50% from the same period a year ago.

Going into the future, Yang said in an interview with Jiemian that he wishes Anker to not be recognized as a powerbank company, as those products constitutes less than 10% of the entire revenue now. The ultimate goal is to move toward a product-oriented company like Xiaomi that rely on internal research and development, and offer a wide range of products from portable devices to smart home appliances.

Much like Xiaomi's way of incubating ecosystem/portfolio companies, Anker is now also running a program with the hope of recruiting more hardware entrepreneurs and inventors into the company and give them more freedom to innovate with the backing of an already very successful gadget powerhouse.

As nearly all of its money is made from overseas markets, Yang also mentioned that the point of him running Anker is not about taking overseas customers' money, but to make the company a truly innovative global company. "In the end, 'made in China' is not necessarily made in China, but made together by talents from around the world. That's the way of making world-class products," Yang told Jiemian.