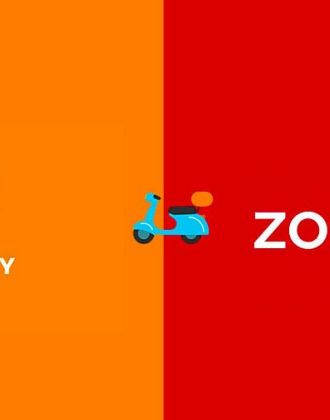 No more Chinese-backed cash burning amid COVID-19 and geopolitical turmoils.

During the COVID-19 lockdown, meal delivery services have got a boost in most countries. However, India's food delivery companies, which received ample financial support from Chinese tech giants, are experiencing a recession.

A merger proposal was put forward by Chinese investors, in the meantime, with Amazon's entry into the takeaway market and India's restraints on Chinese capital, the competition will become unfathomable.

Although the Indian government had included food deliveries among the list of essential services, Business Today reported about 95% of restaurants have gone offline from food delivery platforms with insufficient supply and staff. On the other hand, orders from customers have also plunged as people are worried that the couriers, who travels around regions extensively, are more likely to be infected with the coronavirus.

Economic Times reported citing analysts that In March and April, both Zomato and Swiggy, India's top food delivery platforms, saw orders dropped by about 70%, forcing them to cut jobs.

Zomato, backed by Alibaba's fintech affiliate Ant Financial, announced on May 15 that it would lay off about 600 workers, or about 13% of its workforce. Three days later, Swiggy, funded by a group of investors that includes Tencent, announced that it would let go of 1,100 employees.

"Our business has been severely affected by the COVID lockdowns. A large number of restaurants have already shut down permanently, and we know that this is just the tip of the iceberg. I expect the number of restaurants to shrink by 25-40% over the next 6-12 months," Deepinder Goyal, Zomato's co-founder and CEO, told employees.

More than 450,000 people have been infected with COVID-19, among which 14,476 have died as of June 24, according to the Indian Government. Analysts said food delivery orders in India are not expected to recover before year-end as people adjust to a new normal in the wake of the outbreak.

Alibaba and Tencent have invested tremendous amount of money in Zomato and Swiggy. The two Indian startups employed deep discount tactics to draw more users prior to the pandemic, laying the foundation of heavy losses. Zomato posted revenue of 206 million and 294 million US dollars in losses in its fiscal year 2019, while Swiggy reported a net loss of about $185 million.

The COVID-19 pandemic failed to bring growth to the two parties, instead, more investment is needed to maintain current and expand new businesses, such as grocery and on-demand delivery.

In April, Tencent joined hands with several existing and new investors to inject $43 million as an additional part of Swiggy's ongoing Series I funding round. Less than two months ago, the startup just obtained approximately $113 million from Tencent, Meituan Dianping, and Naspers, both long time allies of Tencent.

Recently, Zomato raised approximately $5 million in a new funding round led by the UK-based Pacific Horizon Investment Trust. In January, it has raised $150 million from Ant Financial, valuing the online food delivery and restaurant discovery platform at $3 billion. Ant Financial has been backing Zomato after picking up a 14.7% stake in 2018. It followed that up by raising its holding to 23% in November the same year, according to regulatory filings.

According to the Economic Times, Chinese investors were anxious about the cliff-like drop in orders and Amazon at the gate, and the idea of ​​merging the two is proposed, as they, especially Alibaba, are not keen to pour more cash into the game. The proposal was initially put on the table at the beginning of the year, but it failed at that time since founders on both two sides couldn't agree on management control of the new entity.

The negotiation is at a nascent stage and has not been officially confirmed by either party, said the report. An Ant Financial spokesperson declined to comment on its strategy in merging the two companies.

In sectors like food deliver, rideshare, etc., competing companies can't sustain prolonged prices wars even with huge war chests and a shift in the investment market can easily deplete them within months. Consolidation has been a common means to an end as it reduces competition and returns competitors to seeking profitability. That's especially the case with Zomato and Swigging facing deep-pocketed Amazon Food.

Geopolitical turmoils also bring huge risks to both Alibaba and Tencent continuing to pour money into India. In April, the Indian Government changed foreign direct investment norms to curb opportunistic foreign takeovers and introduced tougher oversight on Chinese capital. A mid-June border clash in the contested regions of both countries that caused multiple military personnel deaths and severe injuries had also sent the India-China relationship to the lowest point.