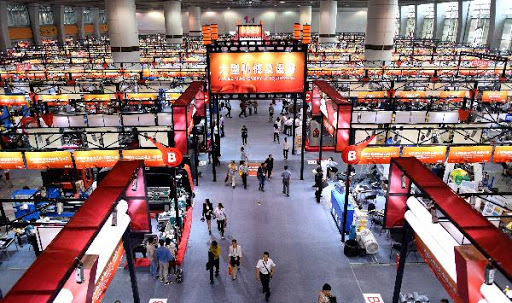 Instead of cancelling the massive event altogether, China attempts to revive the severely damaged export industry as much as possible.

China Import and Export Fair, also known as the Canton Fair and the largest of its kind in China, is postponed and moving online to be held in late June, according to Li Xingqian, Head of the Foreign Trade Department under the Ministry of Commerce at a briefing held on April 10.

The state-sponsored trade show, widely recognized as the barometer of China's foreign trade, was scheduled to kick off on April 15 but delayed due to the Covid-19 pandemic.

Show goers will be able to attend the Canton Fair via around-the-clock live streaming provided by cloud services from Alibaba and Tencent. Exhibitors and attendees are expected toconduct regular business like discussions, negotiations, placing orders like normal. However it is currently unclear how the live streaming scheme will play out, as this would be the first time a largest trade show to be held online.

One exhibitor told PingWest that he isn't sure how the registration and organizing process will look like, and how that would affect his effectiveness attending the show. "I would like to participate in the online Canton Fair, but haven't got any information from the organizing committee on how to register and pay fees," said John Cai, the head of a trade company in Fujian who goes to the show annually.

Moving the event online can save time and travel expenses for attendees and exhibitors, but it's typically more efficient for attendees to go to shows in person, Cai explained, adding that under the current circumstance, unfortunately there seems to be no better option.

As the global trade takes a hard hit amid the Covid-19 pandemic, China's exports plummeted 17.2% in January-February from the same period last year, making the steepest fall since February 2019.

"Foreign demand has declined due to the rapid spread of the pandemic across the world. The biggest crisis faced by foreign trade companies is the plunge in orders," Ren Hongbin, the assistant minister at the Ministry of Commerce, said at the same briefing.

"It's a bold attempt, showing the government's determination to promoting export business. Hopefully, the online fair will bring some orders to my company. As we can tell, it's a tough year," he said.

According to the organizing committee, custom live channels will be available for individual exhibitors 24-7 and will allow either face-to-face negotiation or mass marketing promotion to audiences. However, in trade shows able exhibitors can maintain multiple one-on-one conversations with different attendees at the same time as needed. Replicating that experience online would likely prove to be difficult.

As an integral part of the world's economy, China strives to maintain the stability of the global industrial and supply chain while a majority of factories and companies have now resumed normal business operations. Canton Fair is committed to boosting unfettered trade with its global partners, said the organizing committee.

However, a factory owner engaged in the textile industry told PingWest that although his business has resumed work, numerous orders have been canceled by overseas buyers due to the pandemic in Europe and the US, where the majority of his clients are based. "We don't have any overseas orders to deliver now. Since people abroad are also sheltering in, the demand for apparel is shrinking; therefore, I don't think that the online Canton Fair will bring me a considerable amount of orders."

In addition, affected by Covid-19, cross-border logistics cost is soaring, which also makes exporters drastically more miserable. "Airfreight prices keep soaring," Xia Haofei, general manager of logistics company Jianyiyun, said in an interview with securities news outlet STCN.com, "before the outbreak, it was around 20 yuan/kg, now it has increased to 70-80 yuan/kg.

Ren, the official at the Ministry of Commerce, said companies across the board have had their orders canceled or delayed, and new orders are tough to achieve, "the pandemic has become the biggest uncertainty for foreign trade development."