Uplive, a Livestreaming App from China, Takes Root in Morocco and India 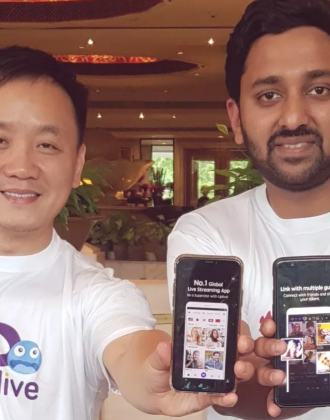 With the help of a cryptocurrency exchange, Uplive launched its own digital virtual currency, Gifto, which simplifies the process of cross-border tipping.

An Indian woman is dancing while a Japanese woman is making cute expressions and keeps saying "Kawaii" (which means "cute" in English): it's a competition for popularity between the two livestreaming hosts, thousands of people are watching and tipping for one or the other, and all of this is happening on the livestreaming platform Uplive.

Founded in May 2016 by the Beijing-headquarted Asia Innovations Group Limited (AIG), Uplive is a platform that allows users to broadcast and view real-time videos.

Greater China was the first stop for Uplive; later, it achieved stable growth in Morocco and India.

Taiwan was the first stop for Uplive to explore markets outside mainland China, since the users there share the characteristics with those on the mainland, and it paid off. Through the company's efforts in the Greater China reigion, in 2016, Uplive ranked No. 1 in Taiwan's livestreaming field. At that time, it had only been in Taiwan for about three months. At the end of 2018, a grand annual Uplive event was held in Taipei with numerous well-known Taiwanese hosts showing up.

Then, Southeast Asia, India, and North Africa came into the company's horizon. Now, Morroco's market is almost entirely occupied by Uplive. Uplive has made many localization adjustments for Arab users, such as modifying the app's layout and designing virtual gifts that are more in line with the local culture.

When the company was founded, two employees who majored in Arabic at college were sent to Morocco to explore the market. Introducing Uplive to people on the street, and drawing hosts to do livestreaming on the platform are now indispensable parts of their daily responsibilities, and the company has set up its own ecosystem in several cities in Morocco.

But according to Uplive, India has contributed the most significant number of users thus far.

Influencer culture is flourishing in India, which has led to livestreaming developing more rapidly there. According to Business Today, there are 27,000 Indian channels on YouTube (personal accounts are not included), with an average of 2 million videos per channel. Moreover, in 2017, each Indian user watched videos for 12 hours per month on average, and as the diversity of video content increases, so does the watching time.

Yogita Agarwal, also known as Yogita Yana, is a famous social media influencer on Instagram with over 200,000 followers. Uplive convinced her to stream on the platform and experience an entirely new global audience. In a previous interview, she said Uplive had created a new channel of income for her, and she has seen many housewives in India improve their living conditions from the tips they receive from the app.

To date, Chinese companies have dominated the livestreaming market in India. Bigo, acquired by China's top livestreaming platform YY,is the top player in this South Asia country; and Cheetah Mobile, well-known for its Cleanup Master and Safety Master in overseas markets, also launched the livestreaming app Live.me targeted to the Indian market. Then there is Xiaomi, the smart hardware giant which has acquired a large share of its smartphone users in India, and has launched its live broadcast software Mi Live there too.

In addition to benefiting from early strategic decisions, Uplive has always taken localization operations as a driving factor. The company says they hire the best local operations teams they can to connect hosts, users, events, customers, and marketing, while bringing the advanced technology, products and revenue models of China's live broadcast market to overseas regions.

According to cofounder Ouyang Yun, in 2018 Uplive earned hundreds of millions of dollars with more than 100,000 hosts.

Another cofounder, Tian Zhixing, is a graduate from MIT. Before starting AIG, he founded three startups, and the last one was acquired by Zynga. The company then appointed him as general manager of its China branch.

The two cofounders met each other in 2000 when they were employees of the Boston Consulting Group.

The official website of AIG, Uplive's parent company, reveals that it has received investment from institutions such as Index Ventures and WhiteStar Capital. Meanwhile, a well-known angel investor who has invested in Facebook, Google, and Zynga has also ventured into AIG, and the name of the investor was not mentioned on the website.

Compared with the competitive domestic Chinese livestreaming field, quite a few opportunities can be seized in overseas markets; however, various obstacles still exist.

In Southeast Asia and Africa, for instance, local governments' supervision of payments, the lack of telecommunications infrastructure, religious sensitivity issues, and more can hinder the pace of development.

According to Sensor Tower, TikTok lost 15 million users due to a two-week ban carried out by the Indian government. The app was blocked in April after an Indian court ruled that it could expose children to sexual predators and contribute to the spread of pornography or cyberbullying.

When asked if Uplive has encountered this dilemma, the marketing department told PingWest that they had not met with such problems so far.

"We are pretty cautious because diverse problems from different regions need to be made note of. Uplive has done a good job in self-auditing. We teamed up four groups of human service teams in Yiyang, South China, to review videos," a staff member said. "The four teams offer 24 hours a day, 7 days a week service. Besides which, the AI review mechanism works beautifully."

Differentiation is the path of Uplive's development. In cooperation with Binance, the biggest cryptocurrency exchange worldwide in terms of trading volume, Uplive launched its own digital virtual currency, Gifto, to streamline the process of cross-border tipping. Real-time translation functions help break down the boundaries between language and space and let global users overcome communication blocks.

But its competitors such as Bigo Live, Live.me, and Mi Live, their ambitions are not limited to the Indian market, either, also having their sights on Africa, Southeast Asia, South America, and even North America, similar to Uplive.

Essentially, livestreaming platforms are social products. Quickly obtaining a massive volume of users is a critical point for them. Growth hacking is a standard method for many platforms; it is an efficient way to increase downloads and lure real users within a short period. But whether in Southeast Asia, North Africa, or the Middle East, as the competition between livestreaming platforms escalates, the cost of purchasing users is also expanding. Behind the soaring costs of obtaining users, further promotion of user growth will be a tough test for livestreaming firms.

Users are always fickle; therefore, how to get and maintain vigorous DAU growth is a core issue for livestreaming platforms. Presenting high-quality and diverse video content to meet varying needs and implementing more localized services may be a sustainable solution.

According to Ouyang in his speech at the 2019 Uplive annual meeting, the company is aiming to boost the number of users worldwide to over 200 million, and complete business deployment in other major regions such as Europe and South America. He also mentioned that it's crucial to strengthen the social features of Uplive.