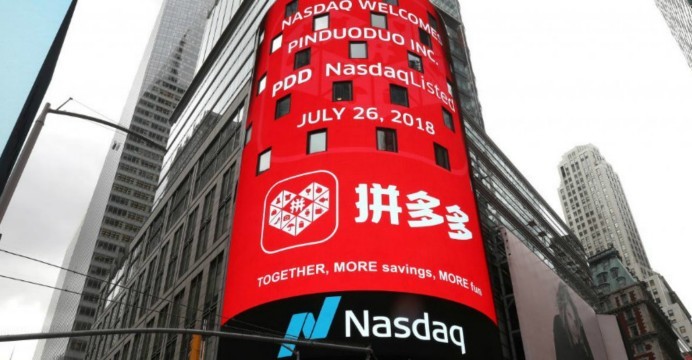 Pinduoduo sellers believe that If they don't accept click farming, their stores will not last long.

Chinese e-commerce platform Pinduoduo was added to the United States' “notorious markets" list for violations of intellectual property rights, according to a US Trade Representative report released on April 24.

However, this is not the whole of it, and recently, PingWest analysts found that click farming is widespread on the platform.

A number of Pinduoduo sellers believe that If they don't accept click farming, their stores will not last long.

Founded by a former Google engineer in Shanghai, 2015, Pinduoduo (NASDAQ: PDD), the rival to Taobao, has since grown massively through heavy discounting and social features in smaller cities and rural areas of China. The company launched its IPO on Nasdaq on July 26, 2018, and as of April 29, its total market value stood at $ 25.71 billion.

On Pinduoduo’s platform, click farming equates to simulated trading or forged transactions. The logic behind it is to simulate real purchases through various methods, thereby pushing up the ranking of the store, raising its profile on the home page, and bringing in more traffic and sales.

However, there are risks since e-commerce platforms have means of investigating such operations. Normally, platforms will punish this kind of behavior immediately, but Pinduoduo has made an exception.

On March 8, 2019, it made a public clarification that "click farming” was not encouraged by the company.

However, it was determined by PingWest analysts that large-scale click farming was not uncommon on the e-commerce platform, mainly due to a lack of supervision. The analysts also noticed that multiple firms recruit people as click farmers to work for Pinduoduo sellers.

After testing the process of completing tasks through those companies, we confirmed that click farming for Pinduoduo is simple, efficient, and reliable, but more importantly, also less costly than on other e-commerce platforms; therefore, professional click farmers have shifted to Pinduoduo—it has become a trend in this industry.

Advertisements with seductive pitches, such as "Reliably increase sales in online stores," "One-stop upgrade store search rankings," and "Provide simplified and user-friendly operations,"  all point to a "big deal"—click farming for Pinduoduo.

"Although the product I've sold is one-tenth of the authentic one's price, Pinduoduo ignored my store for over half a year, not to mention the simulated trading," one Pinduoduo seller said.

Yin Jianyong, a merchant in Chenzhou, South China, was given a common suggestion by other merchants. "You should adopt click farming as much as possible," he was told when he started his store on Pinduoduo.

Yin's wife is in charge of click farming—logging in to the Pinduoduo seller platform and the shopper's end simultaneously on her smartphone—selling the merchandise whilst doing forged trading for his store.

"These simulated transactions can be easily found out by Pinduoduo if the platform wanted to," Yin said. He also mentioned that he and his wife have been click farming for three months. They even achieved a record of 200 pieces of click farming work for a single day. However, Pinduoduo does not seem to be aware of it.

This was verified by Zhang Dongqiang, who was courted by the company as a top seller on its e-commerce platform. "At that time, Pinduoduo ranked commodities according to their sales volumes, so the customer service staff told me that the ranking would be improved by click farming," Zhang said, and he has never heard of a top seller being fined for forged transactions.

Pinduoduo takes action after the volume of forged transactions becomes larger, rather than prohibiting them without any delay.

After doing forged trading for half a year, Yin's account was unexpectedly frozen by Pinduoduo without any notice. Not only was the 320,000 yuan in his account not be taken out, but he also received a 6 million yuan fine with an accusation of selling counterfeit clothing.

Indeed, the clothes he sold were purchased from Guangzhou at a meager price and had been trading on the platform without any limitations for more than half a year. He assumed that Pinduoduo keeps watch over the processes but never intervenes at the very beginning.

"Although the product I've sold is one-tenth of the authentic one's price, Pinduoduo ignored my store for over half a year, not to mention the simulated trading," he said.

Passing out fines and freezing accounts are the two major actions taken by Pinduoduo to deal with irregularities on its platform. Numerous sellers who share the same misfortune with Yin set up a group to fight for their rights. There is general agreement among them that the platform encourages click farming instead of intercepting the fakes at the start because its goal is to wait until the merchant has made considerable profits and then punish it. In other words, it’s a bit like fattening the pig up and killing it.

According to the verdicts released on the unified open platform of the Chinese national court's judicial documents, part of the sellers acknowledged the forged transactions were encouraged by the platform.

The eagerness for boosting GMV growth led to click farming.

Since the release of its 2018 financial report on March 13, the share price of the company has fallen by 30% within a month.

In the fourth quarter of 2018, the marketing expenditure astonishingly reached 6.02 billion yuan, but the total revenue was only 5.65 billion, which means that for every yuan the company has spent, the revenue was only 0.94 RMB.

The vast majority of the business revenues come from online market services, and a small part comes from transaction service income.

The revenue of Pinduoduo's online market services contributed the most to the total; meanwhile, only a small portion of revenue came from its trading services.

Actually, ads and fines constitute the main income of the company.

In the fourth quarter of 2018, its online market service revenue was only 5 billion; however, 6 billion was spent on advertising through multiple channels. This resulted in a net loss of 1 billion for Pinduoduo.

With compulsive investment comes weak revenue. Consequently, the declining take rate for Pinduoduo (the ratio between revenue and GMV which is a significant indicator of the operational capability and profitability of e-commerce platforms) was detected by the capital market. The take rate has kept slipping from the middle of 2018 and was down to 2.76% in Q4.

Therefore, it's quite unexpected to see the lowest take rate in Q4. Since promotion and discount events fill this season, the willingness of merchants to do ad services will reach its reach peak, and the rate should normally rise.

Pinduoduo said the slump in the take rate was due to the enhancement of subsidies for sellers. Yet, according to 36kr, citing an anonymous source who was familiar with the capital market, the company didn't offer a fresh and robust subsidy policy.

Under normal conditions, the demand for ad services will be proportional to the GMV,  and if the take rate slides abnormally in the absence of subsidies, there may be only one reason: click farming.

Click farming contributes to the GMV and transaction service income for the platform and meets its desire for the growth of GMV.

The valuation of Pinduoduo depends on the capital market's perception of its growth potential. Once growth slows down,  the valuation will be adjusted back, which is why Pinduoduo has tried so hard to maintain its GMV growth rate. As a result, forged trading or click farming have prospered—it's the tacit, mutually beneficial deal between the platform, the sellers, and click farming businesses.

(This report is based on Yu Bing's original article, translated and edited by Rebbeca Ren and Michael Strickland)