Despite the capital winter, China's mobile robot receives boosts from billions of dollars in new funding 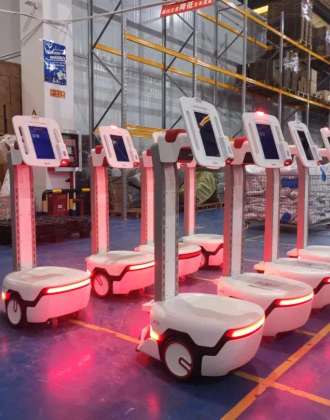 The pandemic has increased venture capitalists' awareness of robotics startups

The funding winter has not slowed the flow of capital into early-stage startups focused on mobile robots, as Chinese investors continue to bet on innovative companies rather than pass up opportunities.

Huge growth potential, large market scale, policy support, and rigid consumer demand are some of the three basic criteria used by investors to determine whether an industry is worth investing in. China's mobile robot market meets all of these criteria.

According to publicly available data compiled by China Mobile Robot and AGV/AMR Industry Alliance, 38 mobile robot startups raised billions of yuan in the first half of this year from a variety of top venture capital firms including IDG Capital, Sequoia China, GL Ventures Zhen Fund, Capital Today, and Source Code Capital. It is worth noting that some of these startups have raised 10 million yuan or more in their Pre-A or Seed round of funding.

Founded in 2018, Syrius Robotics specializes in autonomous mobile robots (AMR), a category of robot that can navigate its surroundings without direct supervision from a human or following a predetermined path. AMRs have a plethora of sophisticated sensors that allow them to comprehend and interpret their surroundings.

AMRs are thought to be more advanced than AGVs, which must travel along predetermined paths.

In the past two years, the COVID-19 pandemic and its control measures have confined millions of workers at home, making China's warehouse robots a favorite among investors. Hai Robotics, based in Shenzhen, developed an autonomous, case-handling robotic (ACR) system and raised $200 million in September last year from major investors such as Sequoia Capital China, Source Code Capital, and Capital Today.

Both Syrius and Hai Robotics, two robotics businesses from China, have made significant inroads into foreign markets. Established in 2016, Hai Robotics has five subsidiaries in Hong Kong Special Administrative Region (SAR), Japan, Singapore, the United States, and the Netherlands, to serve customers in more than 30 countries. Foreign markets accounted for more than one-third of Hai Robotics's income.

Additionally, Syrius has expanded internationally, with foreign markets accounting for half of its sales. It has established enduring economic ties with Kantsu Co., a logistics company, and Mitsubishi Corporation, the country's largest trading enterprise. The startup also has customers in Singapore and South Korea, and it plans to grow its business in those regions as well as in North and Western America and Europe.

China Mobile Robot and AGV/AMR Industry Alliance estimates that by 2021, 20% of the total income of Chinese mobile robot companies will come from exports, demonstrating the growing significance of the international market for these companies.

Mobile robots, which are different from warehouse robots, are become more prevalent in commercial and industrial environments. For years, hospitals have used autonomous mobile robots to transport supplies.

The robots help medical staff with chores including disinfection, cleaning, consultations, and drug distribution. Medical staff can instruct the robot to enter the quarantine ward via an app.

The robot can operate in both small places like hospital wards and hotels as well as larger ones like airport security checkpoints.

To help detect people with fever and record visitor health data, a fleet of robots was unveiled. Robots are on duty 24 hours a day at the intersection of the motorways that enter Shanghai, reminding passing cars to take body temperatures and register drivers' and passengers' health information using a QR code.

Even before the epidemic, mobile robots were frequently used in warehouses and public spaces. However, the pandemic has increased venture capitalists' awareness of startups, giving robot developers the chance to demonstrate how effectively robots can replace humans in tasks like medical delivery, warehouse delivery, and hospital disinfection. The number of robots used to fight the coronavirus has increased, which has sped up their development and application.