Thanks to Xiaohongshu, camping, or "glamping", is on the rise in China amidst covid travel restrictions 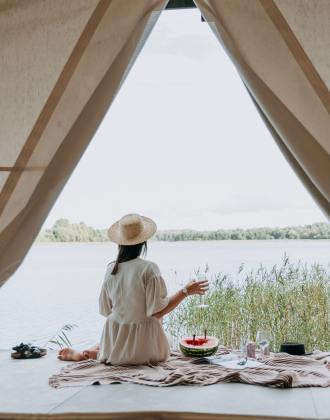 As pandemic-trapped Chinese people being deprived of the luxury of travel due to rigid COVID-19 restrictions, many have diverted their needs to escape the city and stressful lifestyles to a much more accessible activity — camping, or more precisely, “glamping”.

Camping season has begun in China, marked by the recently passed Labor Day (a usually five-day Chinese national holiday in the beginning of May). Since 2020, as pandemic-trapped Chinese people being deprived of the luxury of travel due to rigid COVID-19 restrictions, many have diverted their needs to escape the city and stressful lifestyles to a much more accessible activity — camping, or more precisely, “glamping”.  People will drive to rural suburbs or nearby mountains and rivers, packing a lot more than your average gear of tents and sleeping bags. Taking a rare break and escaping the urban has become pure bliss that people now covet, they perfect the experience by upping their camping game to a whole new level - which means grills, coffee makers, wine glasses, movie projectors, freshly cut fruit nicely laid out on delicate plates, food variety as wide as a buffet, battery packs enough to power multiple phones, laptops, cameras, fans, and decorative lights.

The word “glamping” was first coined in the United Kingdom in 2005, and originally described as “niche vacations”, according to a Today article in 2005. In China, glamping is growing so rapidly that it might not be a niche activity anymore, as the whole country has been seemingly charmed into such a lifestyle. Snow Peak cups, Claymore lanterns, Coleman iron pots, HANGOUT foldable tables, DOD tents, and Marshall speakers are the typical setup of a modern Chinese glamper. But how did Chinese people, with no previous exposure to camping culture, suddenly all gear up as if they had just taken a crash course on camping?

For many Chinese people who were otherwise foreign to the idea, glamping was something they learned from social media, namely the Xiaohongshu (The Little Red Book), a picture-sharing Instagram-like social media platform. A quick search on Xiaohongshu shows camping posts from all over the country — adults, children, and even pets fully indulging in scenic views of nature and the comfort of modern amenities all at the same time.

Posts about glamping have been emerging on Xiaohongshu since 2020, as the platform tries to promote it with hashtags such as “#weekend escape plans” and “#first time camping”. Last year, from August to September alone, Lifeshu, one of Xiaohongshu’s representative accounts on the platform, launched three camping reward programs, with a total of 42,000 yuan prize money. Users who posted camping-related content and gathered more than 10 likes could win up to 500 yuan if they were randomly selected by Lifeshu. This year, Xiaohongshu continues to focus on camping and throws in more tempting rewards. According to the currently ongoing “Xiaohongshu Camping Season” event, users are now randomly selected to win 10,000 yuan worth of shopping vouchers, Marshall speakers, go pros, or switch game consoles, with no minimum likes requirements.

Starting off as a beauty and skincare community, Xiaohongshu is known for being an aesthetic-based social media platform that has long been trying to expand itself to incorporate more user groups by branding itself as a lifestyle platform. Camping has been a successful attempt at that. Previously, “Lifeshu”, one of Xiaohongshu’s official sub-accounts, posted a variety of content including college life, pets, children, museum exhibitions, restaurants, and global travels. Now the account is mostly restricted to promoting outdoor and camping-related content.

Under one of Lifeshu’s posts, the top comment reads “I only downloaded Xiaohongshu for all the camping stuff,” while another user replied, “same here.”

Xiaohongshu‘s events have since boosted the popularity of camping. The search volume of camping on Xiaohongshu increased 230% in 2020 year on year, 360% in 2021 year on year, and 623% in 2022 year on year. Camping has gradually outgrown being the niche of ‘first-tier’ cities and saw its popularity rise the most in third and fourth-tier cities. In 2021, the search volume of camping on Xiaohongshu had increased 740% compared to the previous year. Subsequently, prices of camping equipment rose significantly. For example, a Snow Peak flat burner retails for 12100 JPY(618 yuan) on Snow Peak’s website, yet goes for 1300 to 1700 yuan on Taobao by resellers, doubling or tripling its original price. High-end brands have also rushed to join the camping hype. Luxury clothing brand Burberry previously posted a series of “must-have items for glamping” on Xiaohongshu, while Rolls-Royce partnered with luxury bed maker Vispring to host a safari-themed camping party in Hangzhou.

As people are learning more and more about glamping on social media, camping with fancy equipment might seem like the only proper way to do it now. Beijinger Werwer had to learn this the hard way — when she brought her neon-colored outdoor tent to a camping site filled with minimalistic white tents, she was stared at and even laughed at by strangers. “A woman with black sunglasses and in red lipstick camping next to me sneered as she sat under her fancy tarp,” said Werwer, who used to go camping the “classic way”  as a kid with her parents, and did not realize her green and pink tent is now considered tacky.

“Next time I go camping, I will choose one that prepares everything for me.” Werwer is referring to all-included resort-like glamping services. Just like Werwer, many people are jumping to glamping with zero experiences, meaning they lack the knowledge, skills, and equipment to glamp by themselves. Service providers such as DARE, Outland, ABC Camping, and On Earth, provide comprehensive equipment, amenities, food, and activities — everything guests could possibly need with packaged pricing for people to simply start glamping without purchasing thousands of yuan tents.

Interestingly, over 70% of DARE’s orders came from Xiaohongshu users, further solidifying the influence of social platforms on consumer behaviors. Other tech companies in China are starting to pay better attention to the camping trends as well, as Baidu Maps recently rolled out a camping maps function in collaboration with DARE, allowing users to view details about all DARE locations with a quick search. Taobao released a GenZ camping socialization report in 2021, pointing out that camping has become the new favorite activity for people born after 1995.

Founded in 2020, DARE has grown to be one of the most popular glamping providers. With its quick rise, DARE was able to secure multiple rounds of financing in 2021 and plans to enter the camping equipment market this May, according to its founder Zhu Xian.

DARE won’t be alone, as it is one of the 41,000 camping companies in China, of which 30,000 were founded after 2020, according to Qichacha, a company data provider. It will also have to compete with the likes of Mugaodi, an outdoor equipment and clothing maker founded in 2013. Mugaodi previously catered to mountain climbers and hikers, and has transitioned itself into a young lifestyle brand in recent years through collaborations with brands like Line Friends, amid the camping hype. The company’s domestic revenue from 2018 to 2019 was about $150 million, with a negative growth rate. However, in 2020, its domestic revenue growth rate had turned from negative to positive, reaching $123 million in the first half-year alone, and achieving a net profit of 53,429,700 yuan in the first half of 2021.

In 2021, the market size of camping in China was estimated to be 35 billion yuan, per iiMedia, with huge growth potential. There are currently over 1700 camping sites in China, which may seem trivial considering China’s large population base, but is projected to increase as camping companies such as DARE, Outland, ABC Camping continue to prepare new ones. The policy shifts in their favor as well. According to China’s 14th Five-Year Plan for Sports Development, the State General Administration of Sports encourages social forces to participate in the construction of 10,000 outdoor sports camps, and promotes the use of water, airspace, forests, grasslands, and other natural resources to be opened to outdoor sports.

However, despite all the glamorous numbers, the peak of China’s camping market is yet to come.

Photo by Lucija Ros on Unsplash