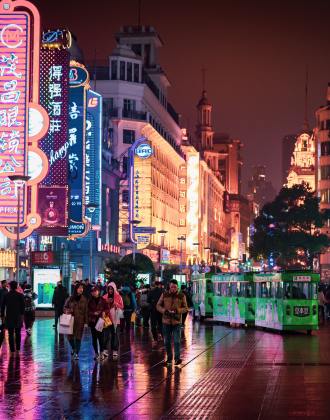 After a period of frantic capital inflows, China's new consumer sector is cooling down.

Yatsen Holdings Limited, a once fast-growing Chinese cosmetics and skincare Group, is facing a delisting warning from the United States due to its recent poor performance. This could be a red flag for other Chinese consumer brands, as depressed consumer confidence appears to be stifling their growth.

On April 12, the company announced that it had received a letter from the New York Stock Exchange (NYSE) notifying it of violating the exchange’s minimum price regulation, as it had been trading below $1 per share for 30 consecutive days. To comply with NYSE rules, it could conduct a reverse split that would bring the price per share above $1, or else it could be forced out of the market.

The Chinese beauty group’s stock price peaked in February 2021 at $25 per share, with a market capitalization of more than $15 billion, and as of Monday’s close, it was around 60 cents per share, with a market cap of only $379 million. In the past year, its market value had shrunk by more than 90%. Aside from the widespread sell-off in Chinese stocks, what other factors had been responsible for dragging the erstwhile red-hot company into such jeopardy?

By positioning itself as China's L’Oréal equivalent, Yatsen had made an impressive $617 million initial public offerings (IPO) on the NYSE in November 2020. The less than 9-year-old homegrown company had already developed three brands - the affordable makeup line Perfect Diary, fashion cosmetics line Little Ondine, and skincare brand Abby's Choice - under its wings.

Among them, the most notable Perfect Diary, had made a name for itself in China by collaborating with influencers who reviewed the brand's lipsticks, eyeshadow palettes, and many other products on Chinese social networks such as Douyin and Xiaohongshu (known as Little Red Book in English).

As a result of the aggressive social media marketing strategy, the brand's sales have significantly surged. It was the only color cosmetics brand to achieve over 100 million yuan ($15.38 million) in gross merchandise value (GMV) on Alibaba's marketplace Tmall during each month of 2019. In 2020, during Alibaba's 11.11 Singles Day Sale event, the most anticipated online retail extravaganza in China, its sales increased by leaps and bounds, ultimately surpassing 600 million yuan ($92.28 million).

However, during Singles Day sale in 2021, its sales have already made a sharp drop to 291 million yuan. Its rival Florasis endured the same fate, with sales falling from previous years 519 million yuan to 307 million yuan. Meanwhile Alibaba, China's largest e-commerce company, recorded a gross merchandise value growth of 8.5% during the event, notably, a record low.

The downward trend in Yatsen's sales was confirmed in its fourth-quarter financial report. For the fourth quarter of 2021, the company saw its revenue fall 22.1% year-on-year to 1.53 billion yuan, the first-ever drop in quarterly revenue, though its net losses narrowed 69% to 475 million yuan.

"While we began on a strong note in the first half of 2021, we experienced a significant deceleration in the second half, particularly during the fourth quarter," Jinfeng Huang, founder and CEO of Yatsen, announced in the latest earnings call.

The company attributed the unsatisfying data to a combination of factors, including weak consumer demand, a higher prior-year performance, as well as fewer discounts and promotions.

Given Yatsen's negative sales forecast, its performance also appears to be struggling to see any breakthrough in the first quarter of 2022 and the following months. "Our sales will be down 35% to 40% in the first quarter," the CEO said, adding that the company is working to offset the impact by cutting costs and improving operational efficiencies.

Chinese consumers are becoming increasingly cautious of spending money than they were near the start of the pandemic. Re-tightening COVID-19 pandemic controls have shifted previous household spending patterns away from discretionary spending towards non-discretionary necessities. Rather than spending or investing their money, more Chinese people opted to saving in the first quarter of 2022, findings from the quarterly People’s Bank of China survey showed.

Retail sales, a main gauge of Chinese consumption, plunged to 1.7% growth year-over-year in December 2021, down from 3.9% in November and 4.6% in December 2020. The decline in sales growth is mostly due to consumers’ muted demand on the back of an overall economic slowdown, said New York-based research organization the Conference Board.

A near-term recovery in consumption is unlikely in China, as the strict containment measures, including comprising lockdowns, business shutdowns, quarantines, mass testing, and mobility controls, look set to remain firmly in effect for the foreseeable future, the nonprofit predicted.

After a period of frantic capital inflows, China's new consumer sector is cooling down. According to market financial data service platform JingData, 1,064 investment and financing deals have been completed in the consumer market in 2021, with a transaction value of 160.8 billion yuan. That means an average of 266 deals worth 40.2 billion yuan were closed in a quarter.

As economic headwinds mount at the beginning of 2022, investment in the consumer market has also decreased. Data show that in the first quarter of this year, a total of 137 fundraising events happened in the industry, of which 111 disclosed the amount, totaling around 13.56 billion yuan.

The chill has already been passed on to the secondary market. Besides Yatsen, the stock prices of listed new consumer brands such as art toy company PopMart, bubble tea chain Nayuki, and beverage chain Helens have all suffered blows indisputably, even breaking their issue prices.

To achieve sustainable growth, Yatsen said it is shifting its focus to taking a more balanced and holistic approach. In the new stage of development, it is determined to create a diversified brand portfolio covering products at different price points, enhance research and development capabilities, and promote more durable and iconic brands with fewer promotions and discounts.